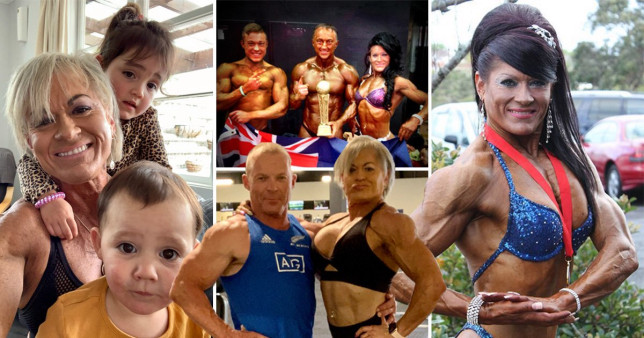 A grandmother who loves bodybuilding has found more than just a healthier lifestyle in her local gym – she also found love.

Sue Bettridge first took up the hobby at 40, and she was shaking with fear in her homemade bikini during her first

competition – but to her complete surprise, she won. After her shaky start, Sue, now 54, from Palmerston North in New Zealand’s North Island, has gone on to win a string of championships.

Sue says fitness training also helped rebuild her confidence after her divorce, and she has now found new love at the gym – where she still works out 90 minutes a day, six days a week – with sporty fiance Simon Roelants, 60.

After her 25-year marriage to her high school sweetheart ended in divorce in 2013, bodybuilding gave her a boost.

‘Splitting from someone I’d been with since I was 15 hit me very hard but fitness training helped me rebuild my confidence,’ she says. And now the sport has brought her new love with Simon. ‘We’re just the perfect match,’ adds Sue.

‘We both love bodybuilding and nutrition, and physically our bodies have a similar definition – people often say we mirror each other.’

Before she took up bodybuilding, 5’4″ Sue was just a regular gym goer – until six years in, a trainer there suggested she should try it.

‘I’ve always liked sports and been competitive, but I’d never thought about bodybuilding until one of the trainers at my local gym told me I had the right shape and should enter the local competition,’ she recalls. ‘He kept on about it and eventually I agreed.’

In the run up to her debut, at Hawke’s Bay Bodybuilding Show in 2007, Sue faced a dilemma – what to wear to show off her burgeoning triceps, back and thigh muscles.

‘I struggled to get much information about what to wear as it was a very male-dominated sport and there weren’t many women competing,’ she says. ‘Bikinis were compulsory so, in the end, I decided to go for it and make my own.’

Luckily, Sue had worked in fashion and design, running her own clothing brand throughout her 20s and 30s, so the turquoise bikini, made from stretchy velveteen fabric and embossed with diamante, looked the part.

And her moves – from rear back poses, to front, side and abdominal flexes, showing off her biceps, quads and abs – clearly did the job too, because she won. Sue went on to win more national and international titles, including the WWF (World Fitness Federation) Miss Universe competition in South Korea in 2014.

And these days, Sue is still competing at the top level in New Zealand and abroad – with plans to enter the national championship again in 2021 and compete overseas representing her country if Covid restrictions allow.

And she also works as a nutritionist and body transformation coach based at the local gym where she trains using free weights, dumbbells, cable resistance and plate-loaded machines six days a week.

It was there in October 2018, that she first met her fiance Simon, a film cameraman, who was exercising alone while Sue was working out with a male client who praised her now-fiancé’s strong leg muscles from across the gym.

‘Simon had moved from Auckland to this area and joined the same gym,’ says Sue. ‘I’d seen him around and one day he just asked me out for a coffee after he’d been training.’

Now, the couple work out together every chance they get – though Simon is too shy to take up competing himself – and share a passion for nutrition, in support of their training.

In April 2019, they moved in together and then in February 2020, Simon proposed while the couple danced in each other’s arms to a live band at a friend’s wedding, in Hamilton.

Now they are planning to marry on April 10 this year, in a rose garden in Palmerston North. ‘My granddaughters are flower girls and will lead us down the aisle, while my eldest son is making a speech, my middle son is my witness and my youngest son is our ringbearer,’ says Sue.

Having seen her own life transformed by bodybuilding, Sue is keen to show other women of all ages just how empowering fitness training can be.

‘It’s an incredible way to build self-esteem. It’s never too late and you’re never too old to transform yourself,’ she says. ‘It’s an inner feeling of confidence that’s almost hard to put into words.’

Determination is the key to success, she explained. ‘Getting your nutrition right will give your body the tools it needs but how much you change your body comes down to how much you want it,’ adds Sue. ‘But if you do apply yourself with dedication and focus, you can start to see those changes within that first month.’

But one thing not to worry about, she says, is your weight as you build muscle. ‘Scales don’t tell us what’s going on with our bodies,’ she explains. ‘I don’t have scales in the house.’

Despite all her own motivation and drive, Sue has faced setbacks and injuries along the way. A bad tear in one of her hamstring muscles caused by overtraining meant Sue needed eight months of physiotherapy in 2009.

She has also torn muscles in her shoulder and her back from pushing herself too hard – but has only had three major injuries in her career so far. And navigating menopause has been a challenge too.

Related Topics:Bodybuilding grandma
Up Next