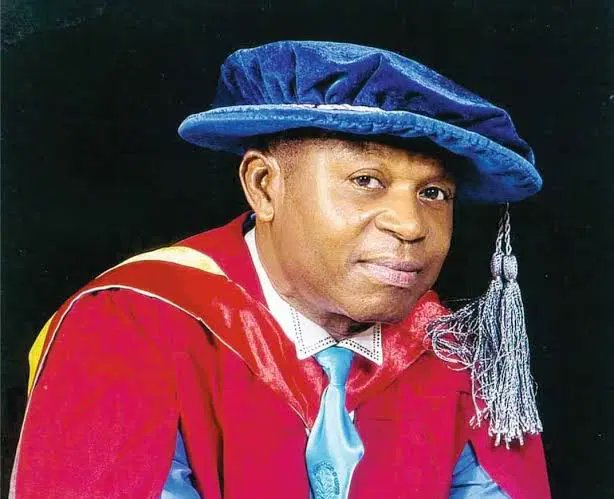 It is very disheartening when truth is tragically buried,  and falsehood elevated to high heavens in broad daylight as truth. If one has not followed the electoral process of the Akwa Ibom  North West Senatorial District in 2019 including the attendant judicial brouhaha which was the aftermath of the election, the story of the conviction of Professor Ogban and the attempt to link it to  Senator Godswill Akpabio would have sounded believable and logical. How on earth can a victim of fraud and election rigging be called a beneficiary of the same manipulation targeted at him? This is the height of mischief!

The truth of the matter is that no matter how you want to bury the truth, falsehood can never gain ascendancy over truth and light.  The attempt to smear and perhaps destroy Godswill Akpabio’s hard earned  reputation and character by few egoistic individuals both within and outside will always fall flat  when confronted with  truth and logic.

To put the records straight,  towards 2019 General Election, Senator Godswill Akpabio felt uncomfortable with  certain characters in PDP in Akwa Ibom State  and had to exit when his continued membership meant murdering his political fortune and future.

The plot for his “downfall” instantly became a project of combined  enemies within and without. His second attempt at return to Red Chambers of the National Assembly was truncated by INEC, the State PDP and some external forces who felt threatened by his  rising political profile at the national scene. The manner INEC in  Akwa Ibom State  cancelled results in areas where Senator Godswill Akpabio won overwhelmingly in 2019 while altering the result of Essien Udim the local government of Godswill Akpabio was barbaric!

What transpired at the State Capital was bizzare. At Uyo, the result of Essien Udim was terribly altered with hand to read APC =  6241.This falsified result was contrary to original result wherein APC had 61,339 and  PDP had 9050.

The evidence of the evil perpetuated against Godswill Akpabio was exposed during the legal battle that took place at the Election Tribunal in Uyo after the PDP candidate was declared the winner. One Dr Williams, the INEC  Collation Officer for Essien Udim  admitted during  Cross Examination by the Counsel to Godswill Akpabio that the result of Essien Udim was altered by INEC Officials at Uyo which led to the emergence of the PDP candidate as the winner.

If Prof Ogban altered result in favour of Godswill Akpabio as INEC and PDP in the State want the world to believe, few pertinent questions here will put things in proper perspective.

1. When and where did Prof Ogban admit that he altered the election result in favour of Akpabio?  At the  Election Tribunal which he refused to appear or at the High Court where he was recently convicted? No such evidence of admission.

2. Why did he, Prof Ogban  and the Resident Electoral Commissioner announce the altered  senatorial result at Uyo and not at the Senatorial District Collation Headquarters if he was working for Senator Akpabio?

3. Whom did INEC comprising  Prof Peter Ogban and Mike Igini  announce as the winner of the Senatorial election in Uyo in 2019, Senator  Akpabio or  Mr Ekpeyong?  It was Mr Ekpeyong that was allegedly declared the winner by the duo.

4. What was the finding of the court of appeal concerning the collation and announcement of the Senatorial Election Result pertaining to Essien Udim by Prof Peter Ogban and Mike Igini who worked for INEC?

An unbiased answer to the above posers will elicit a clear direction  to a genuine mind that is in search of truth on how wicked and  mischievous  INEC and PDP in the State have gone in an attempt to make a victim of their manipulations become a villain in the whole saga.

For those who may have been deceived by the manipulations of INEC and Akwa Ibom State PDP over Prof Ogban’s  conviction which to every fair mind is healthy to our polity and to the glory of  President Muhammadu Buhari’s stance against election rigging, I reproduce here below the conclusions of the Court of Appeal, Calabar Division in an appeal filed by Senator Godswill Akpabio against the “robbery”  that took place in the North West Senatorial District Election held on the 23rd of February, 2019 . His Lordship, Hon. Justice Tanko Husseini held as follows:

1. “The return of the Ist Respondent (Chief Chris Ekpeyong of PDP) as the winner of the Akwa Ibom North West Senatorial District Election held on 23/2/2019 is declared invalid for substantial non-compliance with provision of the Electoral Act, arising in, from acts of vandalism, destruction of Election materials, snatching of Ballot Boxes.

2. The 1st Respondent(Chief Chris Ekpeyong of PDP) was not duly returned or elected by a majority of lawful votes cast in Akwa Ibom North West Senatorial District election held on 23/2/2019, hence his declaration and return is invalid being contrary to provision of the Electoral Act.

3. Consequently, the Certificate of return issued by the 3rd Respondent (INEC) to the 1st Respondent (Chief Ekpeyong of PDP) is withdrawn, etc.”

The Learned Justice went further and this is very important to every discerning mind to note:

“Before I draw the curtain, I think I should reiterate the importance of the relevance of the principles established in the Electoral Act by all stakeholders including political actors as well as the  Electoral Commission that ALL PERSONS WHO WORK UNDER THE COMMISSION, ie  THE 3RD RESPONDENT, MUST ALL WORK TOGETHER FOR THE REALIZATION OF A TRUE ELECTORAL PROCESS IN A DEMOCRATIC SETTING.

“Section 27 of the Electoral Act is one such provision which commands respect and observance of the provisions in relation to the announcement of election results. Section 27(2) (e) for instance provides that;

“The Returning Officer shall announce the result and declare the winner of the election at:

(e) Senatorial District Collation Centre in the case of Election to the Senate.

“Announcement of election results in a place OTHER THAN THE DESIGNATED PLACE, PERMITTED BY LAW IS HARDLY STRICT OBSERVANCE WITH THE PRINCIPLES ESTABLISHED BY THE ELECTORAL ACT . IT NEGATES THAT PRINCIPLE. It amounts to non-compliance”

With this profound pronouncement by the hallowed Court of Appeal, Calabar,  Senator Akpabio and his supporters were expectant that ALL THE ELECTORAL HEADS IN AKWA IBOM STATE that conducted the fraudulent election that warranted a rerun to be ordered would be arrested and prosecuted, alas it is the unfortunate Prof Ogban that the mischievous INEC singled out to sacrifice in order to keep the job and name of Resident Electoral Commissioner.

Our Own And My Own