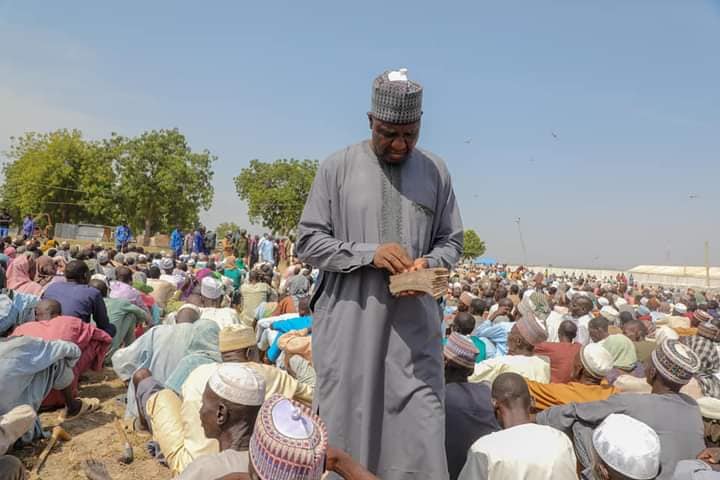 Governor Babagana Zulum of Borno State escaped an ambush by Boko Haram on Friday after he skipped a trip to Baga town to join other governors present at the inauguration of the newly elected president of the Niger Republic.

GreenWhiteGreen GWG reports that Governor Zulum at the risk of his life has been attacked by the insurgents a couple of times and escaped at all times.

The trip to Baga was to have seen the governor lead a convoy of the Borno State Resettlement and Relief Committee.

The Relief Committee, made up of mostly commissioners and other top government officials, according to Vanguard, were coming from Baga town after routine distribution of relief items to Internally-Displaced Persons, IDPs, when they were ambushed along Maiduguri-Gajiram-Monguno Road at Jigalta village of Guzamala Local Government Area.

It was gathered that on the way back from the Baga trip, they were attacked in the ambush laid by the terrorists bringing to light that Zulum may have escaped the Boko Haram ambush because of the trip to Niger.

Scores of the terrorists were killed by the troops with support from men of the Anti-Robbery Squad and Civilian JTF.

The Attorney-General and Commissioner for Justice confirmed the ambush to Vanguard in a telephone chat in Maiduguri. He said: “Yes there were some elements of Boko Haram ISWAP that ambushed troops escorting us from Baga to Maiduguri. “The incident took place around Jigalta village, on our way back. Our military troops did a wonderful job by neutralising all the terrorists.

“Unfortunately, three of the military troops sustained minor injuries during the attack, and are now stable condition. “This is a huge success, as the attackers were suspected to be the ones terrorising and laying ambushes in the roads almost on daily basis.”