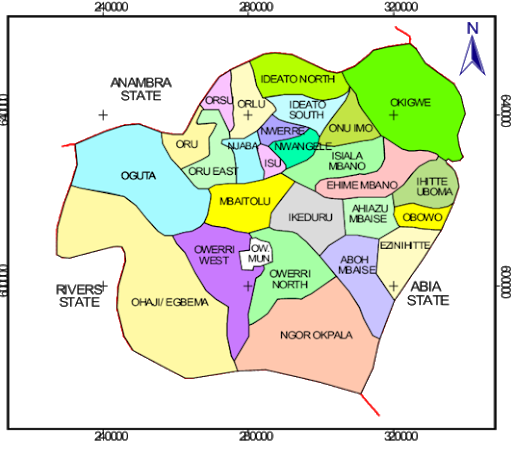 A yet-to-be-identified police officer was kidnapped early on Thursday after unknown gunmen raided another police station in Imo State. The police have confirmed that two of its men sustained injuries in the fight with the gunmen who raided the Mbieri Divisional Police Headquarters situated in the Mbaitoli Local Government Area of Imo State.

GreenWhiteGreen GWG reports that the attack on Mbieri Divisional Police headquarters follows the Easter Monday twin attacks on the Owerri Command headquarters and the Correctional Centre during which inmates were released from the two facilities.

The attack on the Mbieri Divisional Police headquarters in Imo State according to sources also led to the release of inmates who were freed from the cells by the unidentified gunmen.

The gunmen it was gathered also went away with the phones of those they found around.

A resident of Mbieri said the gunmen released the suspects in custody.

However, the policemen on duty were said to have engaged the attackers in a gun duel but they were reportedly overpowered by the gunmen who had sophisticated weapons.

A community leader, Nokey Ebikam, told newsmen that the police divisional headquarters was not burnt but only freed the suspects in detention after vandalizing it.

Police Public Relations Officer in the state, Orlando Ikeokwu, confirmed the attack on the police station but did not go into details.

Daily Trust gathered that aside the officer who was abducted, two others sustained injuries in the incident which is the second major attack on a police station since an armed gang invaded the state police headquarters on Monday.

The Police authorities in Imo have blamed the attacks on the outlawed Indigenous People of Biafra (IPOB) but the group has distanced itself from the attacks.

It was gathered from an indigene of Mbieri that the fleeing gunmen struck around 1am and immediately released the suspects in custody in the police facility.

The gunmen also took away the phones belonging to suspects and the police operatives at the Division.

With Additional Reports from Daily Trust