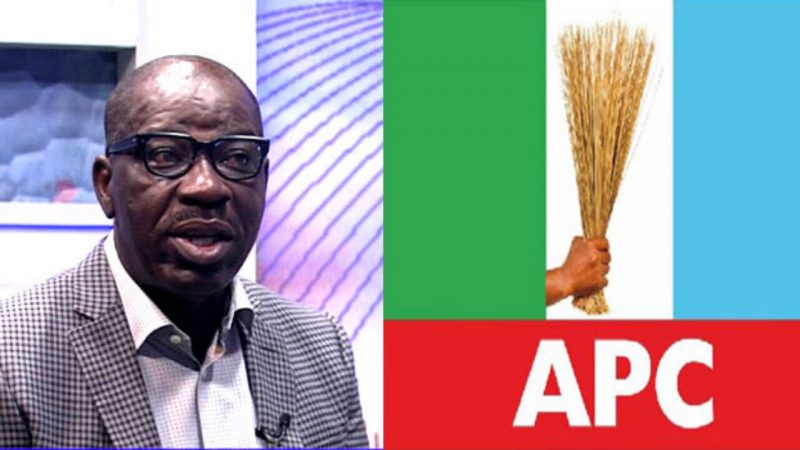 The All Progressive Congress, APC in Edo State has described claims by Governor Godwin Obaseki of Nigeria’s economy descending into an Argentine-like economic fall as “spurious, alarmist, untrue and wicked.”

The chairman of the caretaker committee of the party in the state, Col. Dave Imuse (rtd.) in a statement made available to  GreenWhiteGreen GWG also described as laughable claims by Governor Obaseki that the country’s economic situation is more critical now because of the huge amount borrowed to service it’s debt obligations as a case of pot calling kettle black.

He said, ” the true position is that under Governor Obaseki’s watch, the economy of Edo state is in dire straits with the Governor bereft of ideas about how to get it out, with a foreign debt of $300million and a domestic debt including loans from commercial banks, the capital market, and other doubtful sources, approaching N120billion as at March this year, for non-existent projects”!

Observing how Obaseki has managed the economy of the Edo State, the APC chairman said, “In the past seven months, Governor Obaseki has plunged Edo state into higher debts by taking more loans which has seen a 67 per cent increase in its debt profile. Edo state under Governor Obaseki has overtaken Rivers state as the state with the highest foreign and domestic debt in the South-South Nigeria, and is on a steady course to displace Lagos as Nigeria’s most indebted State”.

Col Imuse added that  Edo State now spends more money servicing debts than on education, healthcare and infrastructure without a State Cabinet and an aged public service, whereas other states are working assiduously at reducing the debt burden on their citizens.

“Some state governments have embarked on the reduction of their domestic debts as of the end of September 2020 according to the Debt Management Office which lists Kogi state government as having reduced the state debt from a cumulative N132.5 billion it was as of December 31, 2019, to N73, 314,904,696.35”, Col Imuse added in chiding Governor Obaseki on his claims on the economy.

Col Imuse said that the PDP Edo state government led by Governor Obaseki is right now holding tenaciously to straws, by personalizing his criticism of the Nigerian government, and urged the governor not to hide under the title of Investment Banker to earn cheap fame.

He admonished Governor Obaseki to, “use the fora created by the National Economic Council, the Nigerian Governors forum and the Nigerian Economic Summit, of which he is a member to offer useful ideas, if he has any, rather than singling himself out for paediatric applause, because the management of Nigeria’s economy is not just the responsibility of one person, but that of the Nigerian government, of which he is a part”.

“For the governor’s puerile claims to hold water, which it cannot, it has to be backed with facts, not speaking blindly with a pocket of sycophants at his Benin office. Everybody today knows that since 2015 when APC came on the scene, Nigeria has been on the path of progress and things are definitely much better than how PDP left it.”