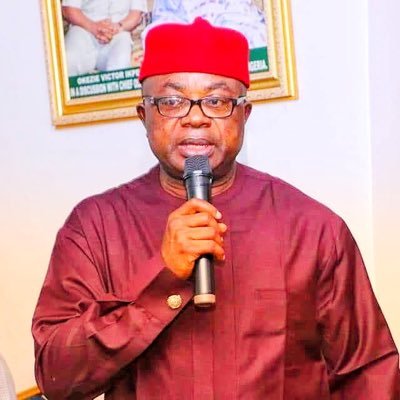 “The Media as the Conscience of the Society: How the Media can Engender Genuine Change in Nigeria” Being a Goodwill Message Presented by Rep. Sam Onuigbo to “A 2-Day Capacity Building Workshop for Bloggers” organised by Online Media Practitioners of Nigeria, OMPAN which held between 9-11 April, 2021 at New Haven Hotel, Abakiliki, Ebonyi State.

In every democracy, it is traditionally stated that there are three arms of government namely the Executive, the Legislature, and the Judiciary. The essence of this separation of powers is to ensure that no one arm becomes despotic. But there is a fourth arm.

This fourth arm, popularly referred to as the fourth estate of the realm, is the media. This fourth arm is by far the most important, especially in terms of setting and monitoring the pulse of the society. This crucial role of the media is given legal backing in Section 22 of the 1999 Constitution (as amended) of the Federal Republic of Nigeria.

That section clearly states that “[t]he press, radio, television and other agencies of the mass media shall at all times be free to uphold the fundamental objectives contained in this Chapter and uphold the responsibility and accountability of the Government to the people.” (My emphasis).

Indeed, the media can dictate the direction a country must take at different times. This, it does, by influencing decisions by drawing attention to topical issues and providing directions that should be taken. This huge influence of the media is witnessed globally in how they influence the outcome of elections which of course sets the tone for the direction countries take over a course of time.

For instance, during the 2020 U.S General elections, former President of the U.S, Donald Trump, admitted that the media played a significant part in shaping the opinion of voters through what he called “biased reportage”, and even encouraging them to participate in the election. In all honesty, this began right from the moment Trump won in 2016.

Journalists can in fact decide to effect a complete media blockage of a particular candidate, thus limiting his or her chances. In the same vein, the media can create particular images of a candidate, and project the same on the electorates.

For instance, during the run-up to the 2015 elections in Nigeria, the media projection was that President Muhammadu Buhari was a strict and incorrupt person, while President Goodluck Jonathan was largely projected as representing all that held Nigeria down since independence. These image projections by the media affected how the electorates perceived both candidates, and consequently affected how they voted.

The same thing happened with the U.S elections in 2016. While Hillary Clinton was projected as a corrupt representative of the establishment, Donald Trump was seen as an outsider, a new blood, that could change the way America had been run prior to that election. As we all know, the election ended in a shock win by Trump.

The point I am trying to make here is that the media play a huge role in shaping the views of electorates and therefore can be powerful agents of good governance. It is just up to them to do it right and not allow financial drives to push them into foisting on the people visionless leaders.

One is of course aware that due to the advent of the social media and the fact that anyone with an online profile these days can lay claim to being a journalist, it has become increasingly difficult for genuine media houses to break even. This has led to many publications being mostly paid for and thus more focused on building the image (whether the information that went into creating such images are true or false does not matter) of politicians which eventually results to what Assistant Professor Nicole Dahmen refers to as “echo chamber in political discourse”. Still, it is important that the media reprises its role as the conscience of the society, and abide by that.

To me though, one of the most important ways the media helps in effecting political change is by beaming its light of absolute truth on what is wrong in our political system and charging the people, through relentless reportage, to rise and vote for transformative change.

Prior to the 2015 elections, whether for good or bad, the media drew the attention of the country to a need for change. They were relentless about it, and in the final analysis, we witnessed the defeat of an incumbent President for the first time in the history of the country. In Abia State, this same drive saw the near emergence of an opposition party candidate as the Governor of the State.

What this underscores is that the media, as the fourth arm of government, has a responsibility to serve as change agents, the watchdogs of society, and indeed the conscience of society. To be able to do this, media practitioners must submit themselves to the highest level of integrity and always champion the truth while refusing to be used as tools to sustain injustice and misrule.

Fortunately, this retreat is coming at a time when there is still enough time to get it right. We all must tell ourselves the truth, review how things are being done in our country and state and decide if we must stick with the status quo or galvanize towards setting in motion a change in our people’s mentality and consequently drive for governance that will set in motion the process of getting it right. This, is the primary responsibility of the media.

The world is changing. Countries are quickly evolving and striving to do things right. It will be calamitous for Nigeria to be left behind. And the process of getting it right for Nigeria and Abia State is far behind schedule, hence the need for urgency. It is the media that bears the responsibility of kickstarting this and thus should take this responsibility seriously.