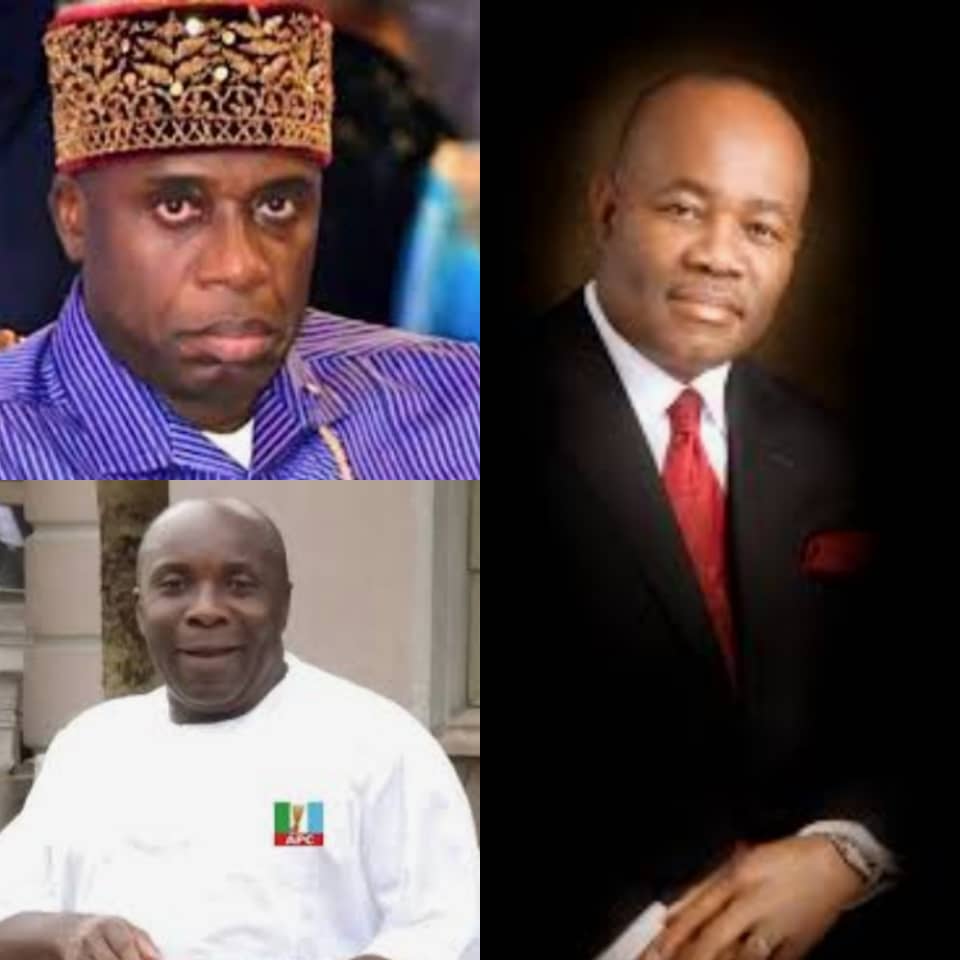 The minister of transportation, Rotimi Amaechi was on Wednesday dragged into the brewing fight between Senators Godswill Akpabio and John James Akpan Udoedehe supremacy fight in the Akwa Ibom State chapter of the party.

Party elder and member of the party’s yet to be constituted Board of Trustees, BoT, Group Captain Sam Ewang, rtd. who pointed at Amaechi as inspiring the strife in the state chapter of the party was, however, rebuffed by Udoedehe who denied any role in the crisis in the state chapter saying that he was more concerned with reconciling party members across the country.

Ewang spoke against the background of contention by supporters of Akpabio that he should be made the leader of the party in the state. Ewang who is championing Akpabio as party leader has been rebuffed by the leadership of the state chapter of the party which is inclined to Udoedehe who he insinuated was being backed by Amaechi.

GreenWhiteGreen GWG reports that Ewang had recently hosted a meeting where Akpabio was proclaimed the leader of the party in the state. That meeting was, however, boycotted by the majority of party elders including Umana Umana, Ita Enang, Nsima Ekere, Eseme Eyiboh among others.

Explaining his reason for pushing Akpabio as leader of the party in the state against the desire of those aligned to Udoedehe who he insinuated is backed by Amaechi, Ewang said:

”I took that action because we all agreed that that stakeholders meeting should hold. Before I went to Akpabio I had exhausted myself struggling to get Udodehe, Umana Umana, Ita Enang and the rest of the elders to come together to form a formidable force to face the PDP.

In a direct reference to what he alleged as the role of the minister of transportation and leader of the party in Rivers State, Amaechi in stirring the crisis between Udoedehe and Akpabio,  Ewang said:

”I also discovered that they had gone into arrangement with their master in Rivers state who is interested in becoming the president of Nigeria come 2023 and even when he doesn’t become he will remain in government and also if they don’t win elections here they will be given appointments.

”Udoedehe is the one causing problems in the party. But that is not all. When Akpabio was inducted into the party at Ikot Ekpene stadium His Excellency Asiwaju Tinubu went to the podium and announced Akpabio as the leader of the party in the state. His Excellency Oshiomole also went to the podium and announced the same Akpabio the leader of the party,” Ewang said of Udoedehe who he insinuated was backed by Amaechi against Akpabio.

Udoedehe while rebuffing Ewang, without dwelling on the issues referring to Amaechi or Akapbio denied having any role in the crisis in the Akwa Ibom chapter of the party.

”The APC National Caretaker Secretary, Senator Udoedehe is not aware of crisis in the Akwa Ibom chapter of the party.

”He is on a national assignment for the party and does not have the time to dabble into the affairs of the state chapter of the party”, he said.

APC Has Become An Ethnic Party In Delta – Defectors