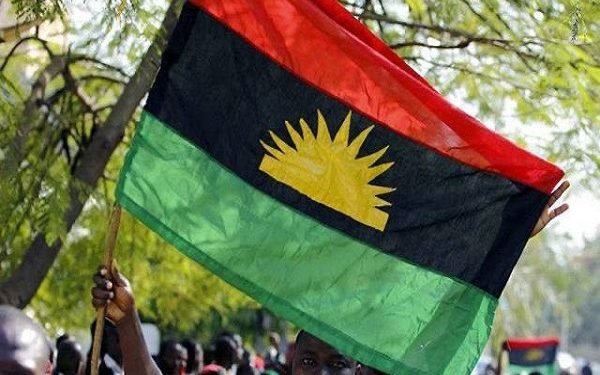 Gunmen on Thursday invaded a bank in Abagana, Njikoka Local Government Area of Anambra State, and hoisted the Biafran flag on the bank the banks in Anambra and hoisted Biafra flags after destroying vehicles on the premises.

The attack at the Abagana bank was immediately shadowed with intrigues as the Indigenous People of Biafra had hours before the attack alleged a plot to attack a bank and put blame on the group.

IPOB had in a statement accused the Department of State Services of fueling the rumour saying that it had no plans to attack any bank or steal money.

It was gathered that the gunmen struck at around 4pm shooting sporadically.

The shooting in front of the old generation bank scared passersby, customers and staff who took to their heels.

It was gathered that the gunmen arrived the bank in a black coloured Honda Pilot Sports Utility Vehicle (SUV).

Anambra police command spokesman, Ikenga Tochukwu while confirming the incident at Abagana said: “Those hoodlums were pursuing their target and when they could not get him, they started shooting sporadically in the air.

“The Command will not allow such hoodlums to run over Anambra State. Investigations are on to actually, unravel the cause of the incident.”

GreenWhiteGreen GWG reports that IPOB leader, Nnamdi Kanu, had before the attack denied any plot by the group to attack any bank and steal money for weapons.

Speaking in a statement by its Media and Publicity Secretary, Emma Powerful, the IPOB leader there was no truth in the rumours.

He accused those behind the rumour as those determined to blackmail the group and discredit its objectives.