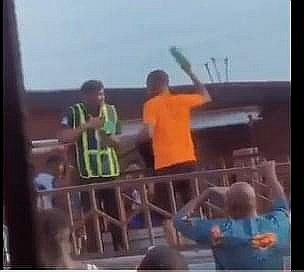 An undated viral video on Wednesday  involving a motorist and a policeman is currently causing public outrage on the social media after the motorist was seen assaulting the armless policeman over an argument in Lagos.

The policeman had apparently insisted on impounding what looks like a mini-truck.

Argument ensued between the policeman and a man holding a bottle at the back of the vehicle, who was trying to force the security man to come down from the truck.

A Twitter user APC Support with the handle @APCNigeria, who posted the video,  condemned the assault on the policeman.

The moment a man appeared to break a bottle on a policeman’s headpic.twitter.com/ntTrjaJMjE— Instablog9ja (@instablog9ja) April 21, 2021

The group wrote: “As much as we stand against #PoliceBrutality, we must also condemn acts like this in the strangest of terms. We call on @PoliceNG, @PoliceNG_CRU, @rrslagos767 to investigate this video, especially if it’s recent, and prosecute the perpetrator of this evil.”

Recall a similar incident few days ago, when ASP Sunday Erhabor, attached to the Rapid Response Squad (RRS) of the State Command was assaulted by one Victor Ebhomenyen at Four Point by Sheraton Hotel, Oniru area of Lagos at the weekend.