Reactions Over Death Of Ada Jesus 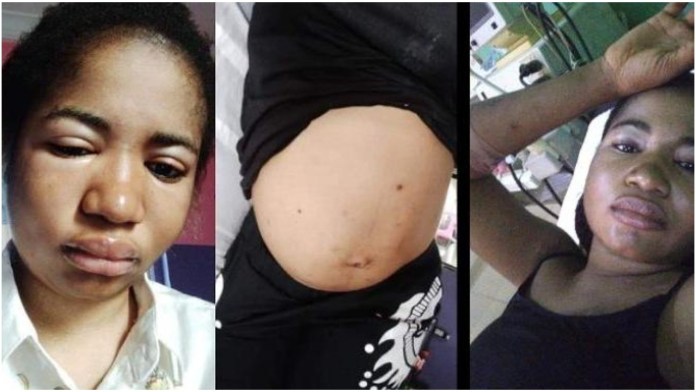 Comedienne Ada Jesus has been reported dead today after having a cardiac arrest just after celebrating her birthday a few days ago and that has generated a massive reaction.

Ada Jesus who was battling with a kidney problem was able to celebrate her birthday on a hospital bed but unfortunately gave up the fight after having a cardiac arrest just a few hours after celebrating her birthday.

According to reports, she died in an Abuja hospital today.

Some citizens have blamed the pastors with who she had an issue but refused to forgive her after asking for their forgiveness asking whether they are happy now that the girl is dead calling for the arrest of the one who afflicted the pain on her.

Others also reacted sadly to her death praying that her soul rests in peace saying at least she was able to ask for forgiveness and settle her misunderstanding between all those she knowingly and unknowingly stepped on their toes.

Here are some reactions:

@Iam_safiano “The contradiction is she had no prior diagnosis or single trace of d kidney issue, or sudden stroke that we heard happened before dat, question now is, how come a young girl with soo much energy suddenly gets struck with strange ailments after her s/media clash with two people?”

@YouthsofNaija “I don’t blame people holding Odumeje responsible for her death.
A prophet of God, why didn’t he heal her since he has the auction to heal the sick.
He didn’t forgive Ada Jesus because if he knows if he does, he is expected to heal her.”

@novieverest “Just heard Ada Jesus is dead. For clarity sake, if the news is true, she didn’t die because she insulted Odumeje or Rita Edochie. She died of an illness. An illness that both young and old people die of. We need to focus on improving our health system. Top pastors have been cursing and wishing Buhari death, baba travels to UK and comes back fresher.

“Before you come here to cry spirituality, I am a Christian. I have seen a lot of things God has done, but you see my God…. His ways are plain open in the Bible. Christ died for Grace, if there’s no Grace anymore.. Then I should quit believing. I have witnessed Him.

“People with health issues will need money for treatment, when they post about it, people will turn it to prayer point. There’s a thin line between all these things. My elder sister was once healed of asthma on a visit to sand field when Bonke visited.

“Average life span in Nigeria is lower than in countries with good health facilities. Your pastors and my priests travel to those countries for treatment. They go on regular medical check. The ones that are honest will tell you.”

@osirmah “Ada Jesus died of Kidney related issues according to reports.That’s what I believe though!! If those statements made to her months back was the cause, abeg make those same people make statements about Nigeria politicians so we can get rid of em al. If not,abeg dead the narrative!”

@FestusGreen “Ada Jesus had a kidney problem, a medical problem. But close family members and friends thought it was all spiritual, thereby further complicating an already stressed situation.

“It’s quite unfortunate how we attribute whatever we don’t understand to mysticism & spirituality!”

@balo_ng wrote “We are too religious in Nigeria, the times and period she’s supposed to be.medically treated, they were busy looking for people behind her calamity”

Related Topics:Ada Jesus
Up Next