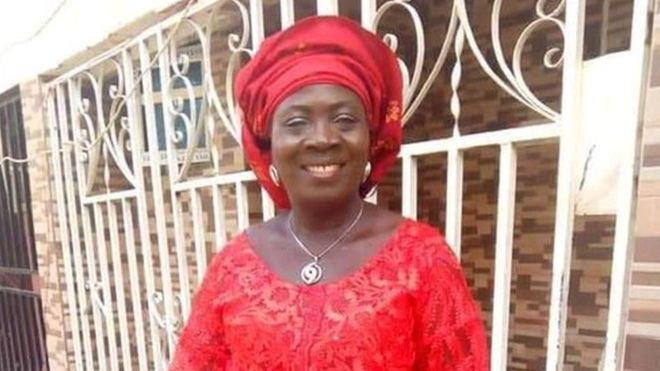 The family of a former women leader of Peoples Democratic Party (PDP) in Kogi, Mrs Salome Abuh, has demanded adequate compensation for her murder and her right to life.

The husband of the late leader, Elder Simeon Abuh, at a news briefing on Friday in Abuja, called on the government and well-meaning Nigerians to treat his family’s homelessness as an emergency.

Abuh said that after one year and five months, no support of any kind had come to them from anyone including PDP, the party his wife fought and died for.

Late Mrs Salome Abuh was on Nov 18, 2019, burnt to death in the family house in Ochadamu, Ofu Local Government Area of the state, where the assailants razed down five houses in the family compound.

The High Court of Justice sitting at Idah in Kogi, has on March 22, sentenced the killer, Ocholi Edicha, to 12 and half years imprisonment having found guilty of all charges.

He said that the recent court judgment had answered the question of whether the offence was committed but never addressed their plights as a family.
“Some level of truth has been established, punishment is said to have been pronounced, whether is being served or not, only God knows.

“Now, therefore, how shall our homelessness and compensation be addressed?” He asked.

He said the reason for the news conference was to appeal to the local and international organisations, Federal and state governments, PDP as a party and spirited individuals to come to their aid, to enable them own dream home again.

“The continuous living in the Internally Displaced Persons (IDPs) situation of my people and others affected in Ochadamu community and silence of the powers that be since the past two years remain worrisome.
“I, therefore, demand that President Muhammadu Buhari, Governor of Kogi State, Alh. Yahaya Bello and APC as a party should, as a matter of urgency, treat our homelessness as an emergency.

Abuh said that the question was no longer about who killed his wife, or why she was killed as the reason had been in the public domain because the killer had already been identified.

According to him, the continuous question remains that, will there be justice for Salome and what is the stand of Nigerian female politicians?

He added that the impact of the gruesome murder of his wife had been enormous on the family, adding that his younger sister and the deceased younger brother had died from the shock.

“We wish to thank all those who see these acts against us as unjust, and passionately appeal to all spirited bodies/individuals to help address our homelessness as an emergency, support our demand for adequate compensation to justify her rights to “Life and Association,” he said.

Buhari Restores Ownership Of OML 123, Others To NNPC