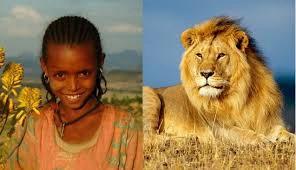 In June 2005, a shocking but interesting story was told of a young girl that was rescued by lions from men who kidnapped her in Ethiopia.

Wondimu Wedajo, a 12-year old girl was kidnapped by seven men who forced her to marry one of them. She refused and was beaten by them.

She was held captive for one week and was being tortured by them and she still refused.

Then a pride of lions came to her rescue by chasing away her captors and protecting her till she was rescued by the Ethiopian police.

People were surprised why the lions did not bite her but rather protected her. Concerning that, a Sergeant called Wondimu said that the crying voice of a girl may be mistaken for that of a lion cub.