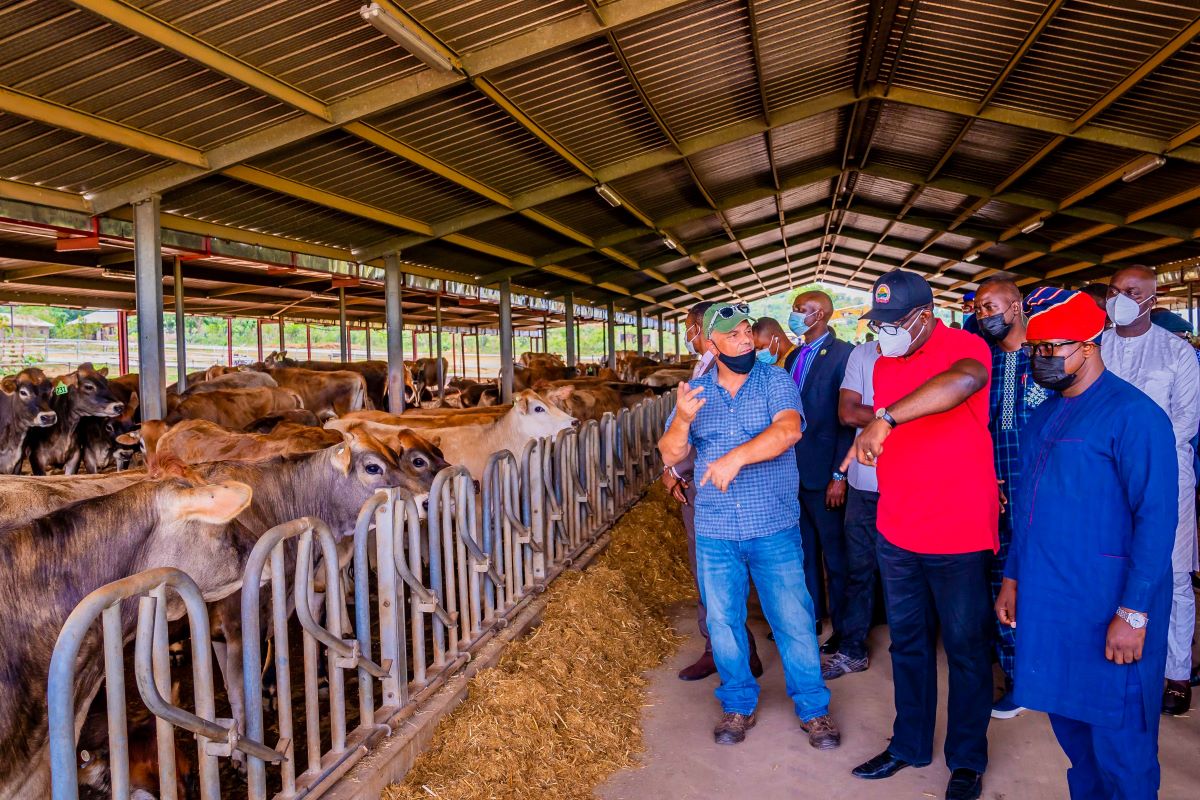 Ekiti State Governor, Dr Kayode Fayemi has said the Ikun Dairy Farm in Ikun- Ekiti, when fully in operation, would serve as a prototype for National Livestock Transformation Plan in addressing farmers-herders crisis in the country. Dr Fayemi stated this at the Ikun Dairy Farm, during an inspection of the newly arrived 227 cows from United State of America and the expansive farm for the cultivation of hays for the cows.

The integrated farm which is designed to commence production of 10,000 litres of milk daily is a joint project by Ekiti State Government and Promasidor Diary Company.

Governor Fayemi, who revealed that the new cows which were pregnant would be confined to their sheds in the farm, said about 500 hectares of land have been acquired to grow fields that would be used to take care of the animals to prevent them from roaming about.

He said appropriate measures have been put in place to connect water directly from Ero Dam to achieve a seamless water supply and irrigation process on the farm.

The capacity of Ikun Dairy Farm which is being put to use for the first time in the last 40 years, according to Dr Fayemi has been expanded to run a 24- hour operation in raising of cattle and production of milk.

He said the dairy farm would also demonstrate Nigeria’s capacity to be a milk producing nation rather than being a milk importing nation.

The Governor who also visited other sections of the dairy in company with the General Manager, of the farm, Mr Hermann Kibler and  Commissioner for Agriculture and Food Security, Prince Olabode Adetoyi, expressed confidence in the Private Public Partnership arrangement between the State Government and Promasidor to guarantee the sustainability and economic viability of the farm.

“This dairy farm has been here for the better part of last 40 years and it has not been put to use. This is the first time that it is going to be put into proper use. Agriculture has we have always said in the State is the pathway to progress. Particularly for us, we are agrarian..

“These cows are going to be stationary, they are not roaming anywhere, they are not going on open grazing, they are right here on the farm. You know what we have suffered from open grazing not just in the state but across the length and breadth of the country,” Fayemi said.

“Once this model works this it will an indication of what we can achieve through National Livestock Transformation Plan.

“And from what you have heard the manager, this is a 24/7 operation, the milk is going to come out of the milk parlour 24/7 and then transportation, marketing and other aspects of the value chain coming to Ekiti,” Fayemi said of the readiness of the cows to produce milk to meet the needs of the populace.

“We have an experienced person who is in charge, who has done this tons of time before coming to work here. We are reasonable confidence that this is the partnership that will work with Promasidor.” He said.

The General Manager, Ikun Diary Farm, Mr Hermann Kibler said the stage was set for the commencement of full scale production, adding however, that the farm was still expecting a few hundreds of cows which he said would be delivered in the next couple of months.