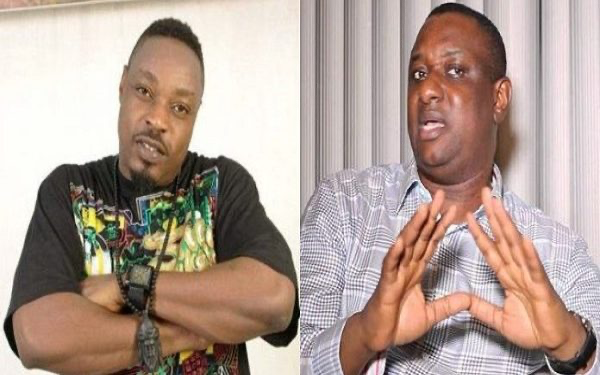 Nigerians were on Sunday dragging Dr. Isa Pantami into the social media fight between Festus Keyamo and his one-time buddy turned antagonist, the musician  Eedris Abdulkareem.

GreenWhiteGreen GWG had reported the social media brawl between Keyamo, SAN, the minister of state for labour and productivity with Eedris after the musician supposedly mocked the minister in his new song.

Keyamo had in response produced private chats in 2018 in which Eedris appeared to have solicited to work body and soul for President Muhammadu Buhari’s re-election. Keyamo, in the released chats disclosed that Eedris turned into an antagonist of Buhari after the president’s camp failed to meet his financial demands.

The evidence produced by Keyamo was not in doubt among social media users on Sunday. However, for many, they suggested that all that Eedris did was in the past and was done when he was a much younger man. Many following in the way that the presidency dismissed the allegations of extremism and war against Christians alleged against the minister of communication and digital economy, Pantami, it was the opinion of many that the issues raised against Eedris should be forgotten and should not be used against him.

GreenWhiteGreen GWG reports that the Presidency had in a robust statement upheld that all the allegations of support for Boko Haram, Taliban and Al-Qaeda and the pledges by the minister to wage war against non-Moslems should be discarded because he does not hold on to those views anymore.

Speaking in the same way, many Nigerians also upbraided Keyamo that he should not have raised the allegations of extortion against Eedris since he like Pantami does not hold on to his former views.

Eedris was 44 when all these happened. He has grown to be a big man now. Forgive him, you’re wrong!

Sir old things have passed away. abdullkarem was just a small boy when he did all this things, now he is older and wise. So play another music.

Eedris Abdulkareem was a young man who didn’t know what he was doing then. This is 2021, he’s grown up and matured. Those receipts no longer represent his views. Can you now address the societal issues he raised in the new song?

If people will be fair . . . Idris has thrashed the extortion ideology. We believe he has changed…however,he approached you when he was at his 20s. If U understand what I mean?

He has Pantami-cally changed his ways. We should forgive him.

Well everything Eedris Abdulkareem said to you is in d past. He made dat text when he was younger. He’s now matured man. We must not allow cancel culture becloud our ability to move beyond people’s mistake especially in d past when they’re younger. Garba Shehu 2021 “È fè ri Werey

Oga keyamo everything edris said and did was in the past he was just a boy finding his direction. If he bashed u on his new song today now his a Man U should forgive him, embrace him and give him a presidential position to be buhari right hand music man. Abi no be so wit pantami

He was young and naive…. forgive him, he knows better now.

There were other some other twitter users who expressed shock at Keyamo’s release of the private communication between him and the musician.

U 4got that someone somewhere is keeping ur own chats & receipts somewhere, someday, one day ur own chats where U were soliciting 4cash & appointment shall be revealed.What is bad in begging 4help/money, we all go through storms, that’s for sure.