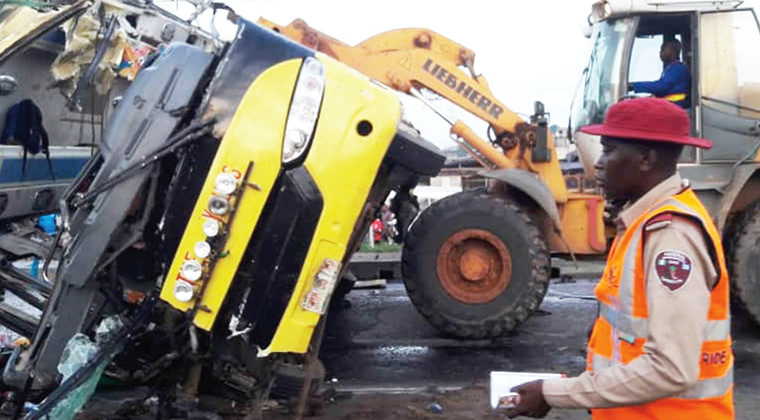 No fewer than five persons died while two others sustained various degrees of injuries in a road crash involving four vehicles around Iperu on Lagos-Ibadan expressway.

Mr Ahmed Umar, the Sector Commander of Federal Road Safety Corps (FRSC) in Ogun, confirmed the incident in a statement on Tuesday in Abeokuta.

Umar said that the accident which occurred at 8:45a.m. was caused by dangerous driving and excessive speed which led to loss of control.

He said that the vehicles involved in the crash included a Mack truck marked UWN 279 YT and an Iveco truck with registration number AAB 973 ZY.

Others are a tricycle marked PKA 438 UN and another tricycle with registration number LSD 566 QF.

The sector commander said that 10 persons including eight males amd two females were involved in the accident.

Umar explained that the five men who died were all in the tricycles while one man and a woman sustained injuries.

He said that four of the deceased were deposited at Fakoya Mortuary, a private morgue in Sagamu.

The sector commander said the fifth deceased man and the two injured persons were taken away by their relatives.

He further said that the crash was avoidable while advising  motorists to avoid excessive speed and dangerous driving as well as obey traffic rules and regulations.

Umar commiserated the families of the victims and urged them to contact the FRSC unit in Sagamu for details of the crash and reclaiming of the victims’ belongings recovered from the crash scene.

Related Topics:AccidentLagos-Ibadan Expressway
Up Next