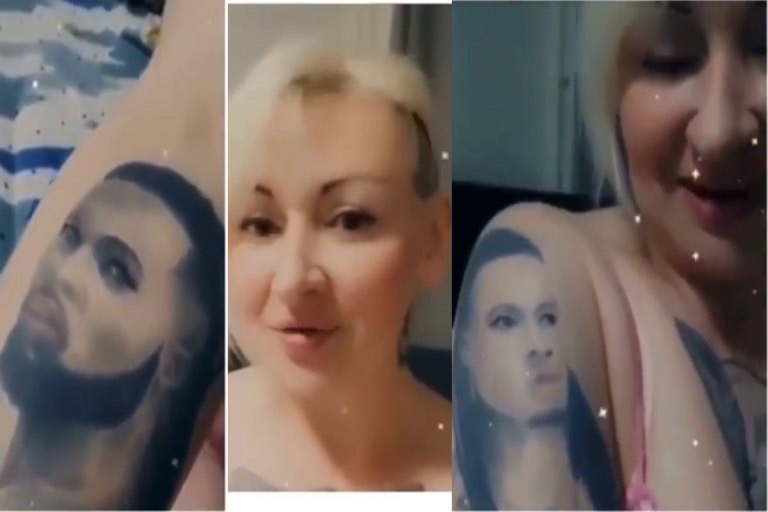 A Russian woman named Marina has expressed her love for Nigerian music superstar, Flavour and showed off the tattoos of Flavour on her body.

The white woman who lives in Moscow revealed that she has been a fan of Flavour for a long time and he loves his music.

READ ALSO: Police Say No Attack On University Of Abuja

According to her, in demonstration of her love for Flavour, she tattooed images of Flavour on her body and she revealed that the first tattoo was done in 2015 and the second done a few days after.

Marina hailed the ‘Ada’ hitmaker as the best musician in the world and she excitedly flaunted the tattoos on her arm as she expressed her love for him.

Reacting to this, some Nigerians alluded to the fact that the Russian woman has been hpynotized by Flavour’s waist.

Below are a few comments from IG users below;

@favour_unique4real: Oyibo no dey tattoo celebrity cus of money this one nah real love @2niteflavourijele 1 appreciate this lady Biko

@j_boy86: Okay am sure flavour will appreciate you for this act

@hugechucksofficial: Flavour is underated, give him respect! Incase you wanna say it’s clout remember She is a white woman, put some respect in Flavours name, forget afrobeat, flavour is fcking dope

@bbycassi3: His waist has hypnotized her

@javerymania_bags: as I dey see this woman so, she no go get yarsh, so nothing for her, because no yarsh no FLAVOUR

Make Sure I Don’t Catch You – Kiddwaya Warns Dorathy Bachor