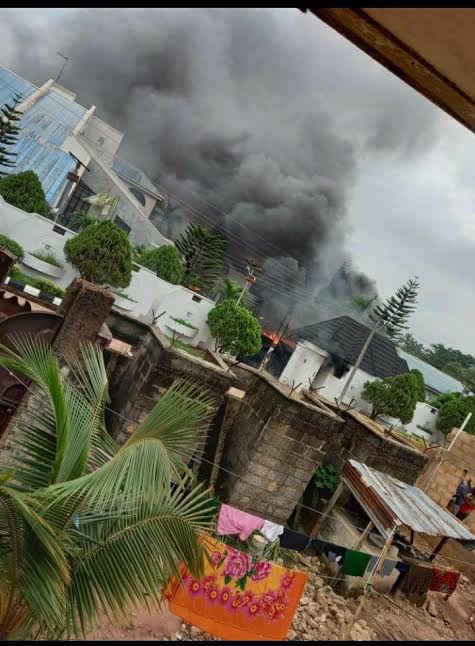 Not until Omuma Oru community, the country home of Imo State’s Governor, Senator Hope Uzodinma, was last Saturday attacked by suspected hoodlums, many, perhaps, may have been underestimating the nature of the insecurity brewing in the South East.

According to media reports, the attackers threw petrol bombs into the compound, sparking a fire incident, which led to the razing of vehicles within the premises.

The reports confirmed the attack happened in Oru East local government area, with an officer of the Nigeria Security and Civil Defence Corps (NSCDC) feared dead.

That in recent times, gruesome attacks on policemen and police stations have been recorded in some of the Southeastern states, including Abia, Imo, Ebonyi and Anambra states, is not a mystery.

Penultimate Monday, two police divisions in Abia and Anambra states were set ablaze by armed groups in what looked like another set of coordinated attacks.

A divisional police station in Uzuakoli, Bende Local Government Area of Abia State, was razed in the early hours of penultimate Monday. It was gathered that the armed group attacked the police station around 2:00a.m and freed suspects in police cells before setting the station ablaze.

The attack happened about the same time as the attack on Zonal Police Headquarters, Zone 13 in Ukpo, Dunukofia Local Government Area of Anambra State, also in the Southeast region.

Due to the incessant attacks on security agencies and their facilities, the Abia state government had imposed curfew on four volatile towns, which are Aba, Umuahia, Ohafia and Arochukwu. But despite the curfew, the gunmen still continued their onslaughts on police stations by sacking the Uzuakoli Police Station.

It was gathered that the gunmen who razed the Uzuakoli Police station used dynamite and rocket launchers, which frustrated the efforts of the policemen guarding the station to repel them.

On their part, the police in Anambra confirmed that two police officers were killed in the state. Some vehicles parked at the station’s premises were also razed.

The Anambra attack came a few days after governors and heads of security agencies in the five states in the Southeast had a regional summit on security, where they agreed to establish a joint security outfit to check insecurity in the region. The Indigenous People of Biafra (IPOB), a pro-Biafra group, has been accused of being responsible for some of the attacks against the police in the region.

Earlier in the month, gunmen had also attacked the Owerri Prison and Imo State Police Command headquarters, setting them on fire and freeing 1844 inmates, same day a police station was razed at Ehime Mbano by suspected hoodlums linked to Eastern Security Network, ESN.

READ ALSO: Cheers For NAICOM As Major Insurance Firm Is Eased Out

Recall that in the last three months, no fewer than 25 police stations were burnt in the South-East and South-South, while 67 security men were killed.

In the North East, Boko Haram insurgents and the Islamic State of West Africa Province (ISWAP) fighters have not relent in launching attacks on civilians, and military troops.

Before the Gaidam incident, insurgents have reportedly being launching attacks in several towns and communities of Borno and Yobe States.

Of all the aforementioned security threats, the insurgency in the North East, never seems to have overwhelmed the Nigerian military troops, leading the counter-insurgency war, for more than a decade.

Aside the gallantry, patriotism and sacrifice of troops, existing cross institutional partnership between the Defence Headquarters (DHQ), and governments of the North Eastern States, is performing wonders.

In particular, Borno Governor, Prof. Babagana Umara Zulum, has been providing adequate moral and logistics support to the military, whose troops have in turn assisted in foiling attacks on bloody citizens in many Borno local governments, towns and settlements.

As part of concretizing the ‘unwritten partnership agreement’, specifically to end insurgency, Prof. Zulum, early this month paid a courtesy visit to the Chief of Defence Staff (CDS), General Leo Irabor, at the Defence Headquarters (DHQ), in Abuja.

Zulum, while speaking, commended the Nigerian military for her zeal and commitment towards ending terrorism in the North East and other contemporary security challenges in the country.

He said the visit was to first congratulate the CDS on his well-deserved appointment, and as well rub minds and cross fertilize ideas that would help to improve the ongoing counter-insurgency operation in the North East.

He further appealed to the CDS to facilitate the return of Internally Displaced Persons (IDPs) to their ancestral homes so as to enable them have access to their various means of livelihood, instead of depending on aids from donor agencies.

Responding, Gen. Irabor, thanked the Governor for his support to the Armed Forces, especially in the area of provision of logistics, which he said has enhanced the combat power of military troops deployed for Operation Lafiya Dole.

He assured the Governor of the Defence Headquarter’s determination to defeat all the country’s adversaries and restore peace in the land.

Brimming with uncommon zeal and energy as brand new CDS, General Irabor, immediately after his appointment in January, paid his maiden operational visit to the Theatre Command in Maiduguri, together with other Service Chiefs.

The visit was not necessitated solely by the need to meet with troops, but also the Borno State governor, eminent traditional rulers and other critical stakeholders, whose concerted efforts can help the military ‘finish’ Boko Haram and ISWAP terrorists–once and for all.

The Defence Chief, sometime in February, also hosted Dr. Kayode Fayemi, the Ekiti State Governor, at the DHQ. Fayemi, Chairman, Nigerian Governors Forum (NGF), appealed to the Defence Chief to proffer solutions to ethnic bloodlettings and violent clashes in his State, and also tackle insecurity across the country, headlong.

Responding, Gen. Irabor, pledged the Armed Forces’ commitment to work with the Ekiti State Government, assuring him that the Nigerian military, under his watch, will remain faithful in defending the country’s integrity.

Bar. Nyesom Wike is one governor who is also interested, and passionately too, in working with the Irabor-led DHQ. When he hosted the CDS, and his entourage at the Rivers State Government House, recently, Governor Wike, assured Gen. Irabor, that the State Government will continue to support the Army and other security agencies.

He, however appealed to him to ensure that the military shuns politics and adhere strictly to its constitutional mandate of protecting the country’s territorial integrity.

The Rivers Governor, also thanked the military for proactively checkmating the activities of the proscribed IPOB, and not giving any room for any terrorists attack in the State.

He charged the CDS to reduce the level of insurgency in the country.

Citing terrorism as one of the biggest existential threat to the country, the governor said he will liaise with the Governors Forum to agitate for the release of more money to procure sophisticated arms and other equipment for the military to end insurgency.

Gen. Irabor, while responding, commended Governor Wike and the State Government for supporting the military and other security agencies.

With the successes recorded by the Nigerian military in containing Boko Haram and ISWAP terrorists, there is the need for South East Governors to urgently seek the assistance of the DHQ in reigning in IPOB ‘secessionists’ and hoodlums. They can understudy how Governors of states in the North East and Central are working closely with the military to stem the activities of terrorists and bandits in their domains.

The governors of the South East states must wholeheartedly support the military if drafted by the federal government to restore sanity in their domains, if hoodlums persist in attacking security formations. It is imperative for those to be recruited as corps members of the region’s joint security network, Ebube Agu, are armed and fortified with requisite military combat skills, to disarm, but not to extra-judicially eliminate alleged criminals.

What nobody will like to see is that the Ebube Agu security network transmutes into a tool for harassing and hounding perceived opposition of governors in the South East. But what many will like to see generally is that all state governments take concrete steps and actions that will birth, nurture and solidify mutually-beneficial synergy with the Nigerian military, whose administrative organ is the DHQ.

They will surely find in the Gen. Irabor-led DHQ a genuine commitment to ending insurgency, and other forms of crimes in the country, in no distant time.

Jackson David wrote in from Abuja.