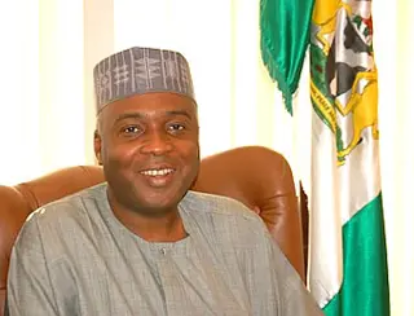 A group under the aegis of Katsina State Youths Network (KSYN) has formally endorsed former senate president, Dr Abubakar Bukola Saraki for the Presidency in 2023 under the platform of the People’s Democratic Party (PDP).

This was even as the Kaduna State chapter of the Network promised to join forces to ensure that Saraki succeeds in his presidential ambition.

However, the leader of Katsina Youths Network, Abubakar Nuhu Adam in a statement made available to newsmen in Kaduna, on Friday, said the endorsement of Saraki was formally done in Daura, the hometown of President Muhammadu Buhari.

According to the statement, the endorsement of Saraki in Daura is clear a sign of the popular saying that “we want to encourage politics without bitterness” in our politics.

The Network said Saraki will be endorsed in two more zones in Katsina State as soon as possible.

“We are here to inaugurate the Katsina State youth endorsement of Dr Abubakar Bukola Saraki as a presidential candidate under the umbrella of the People’s Democratic Party (PDP ).

“We started with Daura zone and we shall, Insha Allah, (God’s grace) expand the movement to the remaining two zones of Katsina and funtua respectively. In the nearest future, we shall open our head office in the Katsina metropolis.

“Therefore, we the Katsina State youth network for Dr Abubakar Bukola Saraki have endorsed him to be our presidential bearer under the platform of our great party, PDP.

“Where are the Nigerian youths, I want to categorically tell you that it was the effort of Dr Abubakar Bukola Saraki the Bill of not too young to run was brought in to the floor of the Senate and later the Bill was signed into law. That give equal opportunities to Nigerian youth to contest into different political offices.

“The intention is to reflect the changing of political Demographic of African most populous Nation and help usher in younger leaders.

“We, therefore, ask you and well-meaning Nigerians to join hands with us in this notable course. My brothers and my sisters, let grow Nigeria together.

“As I look round this hall my pride overflow at the sight of a large number of my political friends and other well-wishers who have shown strong desires to see the progress of this gathering,” the statement said.

Also, in a similar statement by the leader of the Kaduna State chapter of the Youths Network, Mohammed Makera said, “Bukola Abubakar Saraki, was the 13th President of the Senate of Nigeria from 2015 to 2019 and Chair of the 8th Nigeria National Assembly. We see in him the qualities of a leader the country deserves.

“We believe he still has a shot to take at the presidency. He is young and educated, and he has both executive and legislative experiences, which are added advantages to him. He still has his political connections. He is a key stakeholder in PDP and party politics in Nigeria.

“We will ensure that his popularity soars higher for the presidential race as we inch towards 2023 general elections.

“We will work for him to succeed, and we are ready to join forces with our brothers in Daura, Katsina State to ensure that Bukola Saraki’s presidential ambition is actualised.

“We don’t believe in the rotational presidency, this is democracy, let the people’s Will prevail. Let the majority votes carry the day.

“Bukola Saraki’s is a young man, highly intelligent to handle the affairs of this country. As the then-Senate President, he controlled a well organized Senate where the Executive arm of government could not use a rubber stamp. We pray to God to guide us on this noble journey for the betterment and of our dear country, Nigeria.”