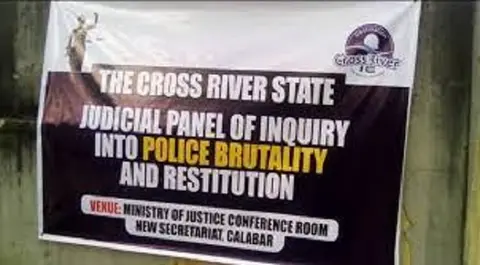 The Justice Micheal Edem Panel of inquiry into Police Brutality and Restitution in Cross River State has ended after 162 days, 24weeks and six months.

Justice Edem in his parting words had said, “I am pleased to announce to you that whatever has a beginning has an end, I think today should be the end of our sitting. I came, I saw and I conquered. Let’s not say it’s a good end but a beautiful end. The panel has been one of its best in the country; we have taken into consideration human rights, we have given everybody a clear chance; we have not denied anybody any fair opportunity to present his or her case.”

The Justice Edem panel which began sitting November 11, 2020, had a total of 60 petitions with 42 petitions adjourned for recommendations and 18 struck out.

In the last seating, 11 petitions were entertained with the chairman vehemently refusing any further adjournment for defence or continuation.

Twenty minutes into the sitting, the chairman who dressed on Navy blue Senator and his Yoruba-like cap, started bleeding from an injury from his left leg (foot) and was rushed out for treatment.

He was deputised by Hon Justice Eno Ebri. However, Justice Michael (Rtd), returned at about 12:18 pm with one petition left on the itinerary.

The State Attorney General, Tanko Ashang while giving a valedictory speech lauded petitioners and lawyers whom he said, conducted themselves in an orderly manner.

He applauded the media for “excellent reportage throughout the sitting.”

The chairman, in his Shakespearean sayings, said the panel which is one of the best in the 36 States, has done a great job because they came, saw and conquered even though many lawyers had said many negative things about the panel.

Justice Edem speaking further added that, though they have made the recommendations, do not know what the entitlements will be stressing that, the ball is now in the court of the government who set up the panel of inquiry.

“I feel fulfilled. These are the kind of things I like to do, to be of use to humanity and everything about mankind which this panel basically is all about. I came, I saw and I conquered.

“Let’s not say it’s a good end but a beautiful end. We had challenges of course as expected from any human institution.

Related Topics:#EndSARSCross River
Up Next