How Rainoil boss colluded with US based hack writer, Azuka Jebose, to defame Ned Nwoko, others 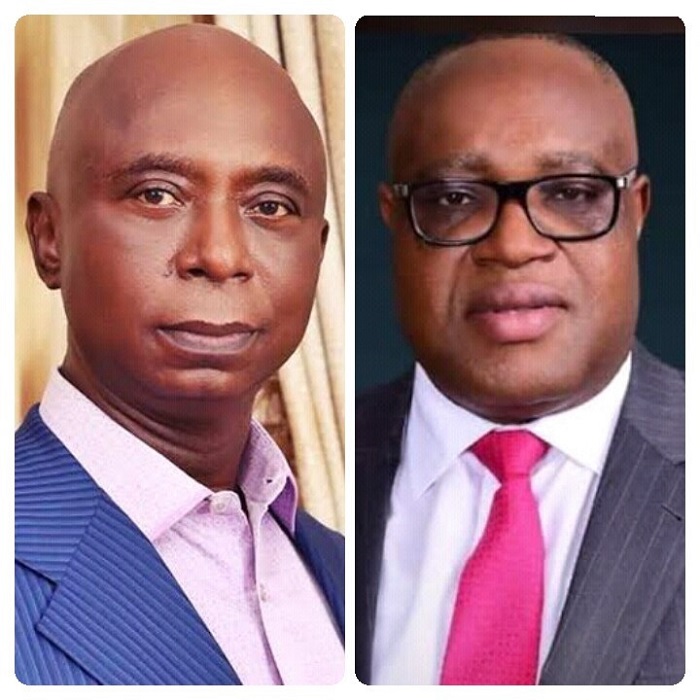 For over five years, Gabriel Ogbechie, the Chief Executive of Rainoil, denied knowing or sponsoring a mercenary low writer named Azuka Jebose. He repeatedly and vehemently lied about having anything to do with the US based poor propagandist who wrote blatant lies and defamatory stories about renowned Lawyer, Prince Ned Nwoko, Nigerian Judges, the Attorney General of the Federation, AGF, the Inspector General of Police, IGP and traditional rulers of Aniocha North Local Government Area of Delta state.

Jobose’s writings and tantrums were the result of Ogbechie instigated land disputes in the village called Idumuje-Ugboko, in Aniocha North Local Government Area, where both Prince Ned and Ogbechie himself hail from. Several people had called out Ogbechie over Jebose’s acidic writings that crudely violated hard earned reputation and integrity. But Ogbechie remained adamant that he had nothing to do with the cheap cash-for-pen writer.

But , at last, Ogbechie has been exposed to be a man without a sense of honour despite his corporate status as boss of a supposed big oil and gas company. The fact is there is now a conclusive and indisputable evidence that Ogbechie actually engaged Jebose to do his dirty job and has been feeding him with lies without caring about the barbaric defamation of the character of the distinguished, highly placed and very reputable people he was writing about. All because of Ogbechie’s desperation to stop Prince Ned Nwoko from building a university in their village, a developmental project approved by the Obi-in-Council, by the Land Allocation Committee and the entire village which was why the Aniocha North Local Government had no hesitation issuing him a Customary Right of Occupancy.
Now, we have in our possession full and irreducible evidence that the Rainoil boss, Gabriel Ogbechie, called Jebose 187 times feeding him with insipid and despicable lies to be used as propaganda against a much more accomplished folk, Prince Ned Nwoko, including government and judicial officers diligently carrying out their duties.

And why has Ogbechie been so desperate to frustrate Prince Ned’s project ?

The first is that he had hidden plan to establish a palm plantation on the land that was approved for Prince Ned. Having failed in all his awful plans despite his diabolical machinations and manipulations in the last four years, he went to Illah and Akwukwu in Oshimili North Local Government Area to acquire 5000 hectares of land for the palm plantation project displacing hundreds of farmers without adequate compensation . Unfortunately, because he is addicted to manipulating people everywhere he went to achieve his self centred goals, he tried to reenact his act in these two hitherto serene villages, creating enmity among them and now many of folks have risen against him and his project is stalled.

But there are other reasons for Ogbechie’s loathsome antagonistic tendencies towards a man he dubiously claims to be his brother and friend . Ogbechie somehow feels that Prince Ned is his rival and this delusion can only be described as ridiculous. He needs to recognise this unblemished fact. And one can say this with utmost sincerity that even if Ogbechie becomes the richest man in Nigeria tomorrow, he will never be judged as one of the Prince’s peers in any way.
While Ogbechie is a trader in oil and gas, Prince Ned is a world renowned Lawyer. He is a man whose contributions to the economy of his country and the welfare of its citizens will remain imperishable. Several reputable media organisations have credited him with almost single handedly pulling his country out of recession for his heroics in repatriating billions of dollars for Nigeria through the Paris Club refunds, the outcome of his judicial victory over the international financial behemoth . That gruelling legal battle he fought alone for his nation is uncommon act of patriotism and heroism that ushered him into the pantheon of Nigeria’s greatest men of all time. In a country that recognises sterling achievements, he probably would have been decorated with the country’s highest national honour.

This is infinitely beyond Ogbechie.

It is this profoundly adored reputation that Ogbechie seems irrepressibly determined to smear, a reason he has been concocting lies and paying Azuka Jebose to dramatise his own hate culture and shame on the media. Unfortunately, Ogbechie will never be able to affect Prince Ned’s personal life, business or political trajectory as the much more exposed Prince is always years ahead of his diabolical, even if, disgraceful plans.
This comprehensive exposure of Ogbechie’s fiendish collaboration with Jebose to lie perpetually about a noble character like Prince Ned further confirms the pathetic notion that he has always been a liar.
When his known allies hired hoodlums that unleashed an unprecedented terror and mayhem for a week in Idumuje-Ugboko in May 2017, an atrocious destruction that left two people dead , houses and properties destroyed, Ogbechie tried to rewrite the story of a palpable vicious act of terrorism. He claimed in a Vanguard publication that it was the youths of the village who only avenged a previous attack on people at the village Palace. And brazenly lied further as he asserted authoritatively that there was no destruction . But when the police began to arrest the hoodlums after establishing their culpability beyond any reasonable doubt , he came out to obtain bail for the criminals now facing terrorism charges. And worse still , he lied unashamedly about the real reason for the hoodlums’ arrests.

And only recently a young man named Ossy in a brief detention at the Kuje Correctional Centre, Abuja, exposed an assassination plot being hatched against Prince Ned Nwoko by same hoodlums that Ogbechie has obtaining bail for one after the other. This whistle blower eventually began to receive threat calls on his release. He wrote a petition to the IGP and stated categorically that the mastermind behind the assassination plot against Prince Ned is Gabriel Ogbechie. When the news of this shocking revelation hit the media like a wild fire and the police arrested Ogbechie for questioning, he was subjected to hours of interrogation.

But because Ogbechie pays scant attention, if any, to truth and honour, he denied being arrested by the police. So, one can ask easily, why would you lie about a police invitation if you are not desperate to hide something from the public. Why would you lie in unconscionable manner if your conscience is not bruised. When more and more revelation about his police encounter continued unabated, he was forced to reverse himself and made a press statement where he admitted he was actually ‘invited’, but in synch with his character, he claimed to have spent only fleeting minutes during which the police dismissed the petition against him for having no substance. The whistle blower eventually died under mysterious circumstances shortly after his petition about threats to his life.

Again, Ogbechie took to the media to deny ever knowing the late Ossy or having anything to do with his death.
But on Friday, March 12, 2021, the then IGP, Mohammed Adamu ordered a full scale investigation into circumstances surrounding the whistle blower’s death, a testament to the fact that the manner of his demise provokes curious questions. Ogbechie has continued with his strident denials, claiming not know the deceased whistle blower or having anything to do with his death. But how, just how can one now believe a man who engaged Azuka Jebose like a full time staff , made confirmed 187 calls to him and still denied ever having anything to do with the hack writer and his puerile writings. That is the pathetic story of Rainoil boss, Gabriel Ogbechie and the question of integrity and honour.
There are actually many unprintable lies told by the Rainoil boss all in his envy driven quest to stop Prince Ned, a demonic passion that continues to sizzle without any effect.

But now , the day of reckoning has come. With his sponsorship of Azuka Jebose now established, he will face the full wrath of the Law. He will need to explain what he knows about all the trash that his hack writer, Jebose , has been writing, not just about the Prince, but the immediate past Inspector-General of Police, Mohammed Adamu and the Attorney General of the Federation and Minister of Justice, Abubakar Malami , among others.
Time ticks loud and clear for the Rainoil supremo..