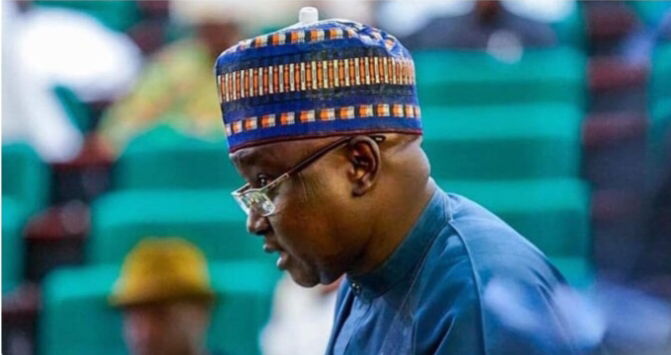 This comment was made by the majority leader in response to the claim of Ndudi Elumelu, house minority leader, about looming defections to PDP.

Recall that Elumelu had said many All Progressives Congress (APC) lawmakers in the lower legislative chamber have indicated interest in defecting to the PDP.

But in a statement on Friday, Doguwa said the lawmakers are occupied with looking for solutions to the country’s problems, not partisan politics.

The Kano legislator also tackled Elumelu for embarking on “a voyage of political philandering” amid Nigeria’s current challenges.

“My immediate reaction was to ignore this delusion, but because of the consideration for unsuspecting and innocent members of our great party and constituents who we represent at the House of Representatives, we owe them this clarification,” he said.

“It is a fact that there was an executive session of the House, which was indeed convened by the leadership for the sole purpose of further discussions about the ways out of the insecurity situation in the country.

It therefore remains a curious slant that Hon Ndudi Elumelu in the heat of the current situation does not have the presence of mind to face squarely the matter that affects every Nigerian rather opting to embark on a voyage of political philandering of looking for new members for an opposition party that is like a sinking ship beyond salvage.

“We believe that working together with the leadership of the House of Representatives, under the leadership of Speaker Femi Gbajabiamila, who only recently in his unprecedented but pragmatic manner had pushed concrete legislative support actions to stem the tide of the insecurity challenge, ranging from appreciation and acknowledgement of our compatriots in uniform on the battlefield, to fast tracking appropriation, among others.

“Without doubts we shall be counted as an integral and veritable partner and component that worked to defeat this national challenge … with all reasonable hands on deck.

“This is our sacred commitment as members of the APC in the 9th house of representatives beyond the lousy tendencies of a sinking opposition party.”