Why They Targetted My House - Uzodimma 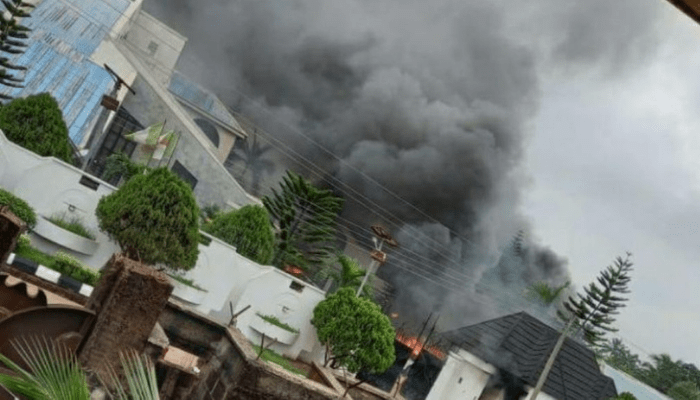 Governor Hope Uzodimma of Imo State has accused disgruntled politicians jealous of his achievements of masterminding the spate of banditry in the state.

Governor Uzodimma spoke on Saturday while addressing workers on the occasion of the May Day celebrations in Owerri.

While noting his efforts in addressing the plight of the citizenry, he, however, pointed at political rivals who he said had teamed up with criminals to rain anarchy on the state.

GreenWhiteGreen GWG reports that the governor’s country home was the target of arsonists a week ago during which his Rolls Royce limousine among other valuables were vandalized or burnt.

Reacting to the crisis, the governor said:

“You would have noticed that disgruntled politicians in concert with militants and other criminal elements have unleashed violence in our state known traditionally for its peace and hospitality. Unable to contain themselves over the developmental strides of our administration in just one year, these enemies of our state have devised devious ways of not only distracting us but striking fear in our citizens. Some of them have even come out to unmask their real intention which are to make the state ungovernable.

“Let me assure the good people of Imo State that investigations to unmask the sponsors of these security breaches in the state have reached an advanced stage. Very soon the long arm of the law will expose and prosecute them

“Recall that at the onset of this administration, these same people had vowed to make the state ungovernable for us. Our only crime against them is our resolve to hand over the state and its resources to the people as the true owners. While I sympathize with them over their feeble and futile efforts at intimidating us, let me declare here that the state will employ all lawful machinery at its disposal to crush criminality.

“Last Sunday’s attempt to burn down my country home was just their Lilliputian way of sending the message that Imo State is insecure. As always, they failed woefully. The government in collaboration with all the security agencies is more than capable to protect the lives and property of all residents of the state. I swore an oath to that. I will never shirk this sacred responsibility,” Gov Uzodimma said.

“It is quite unfortunate that despite the impressive progress we have recorded in the first year in office, some people have failed to appreciate the glaring evidence everywhere that Imo State has taken a turn for the better. This group of fifth columnists has therefore elected to disrupt the peace of the state. Although their actions are quite regrettable, it is my duty as the Governor of the state to ask everyone to sheath the sword and make room for development.

“I must warn that the day of mindless criminality in the state are over. Let me use this opportunity to assure all Imo people that I will leave no stone unturned in ensuring the security and safety of all of us. Be rest assured that my administration is willing, able and capable of protecting the lives and property of all Imo people and residents alike. Without any fear of contradiction, I can declare to you that the recent security challenges in the state have been effectively contained. Imo people should therefore go about their lawful businesses without any fear whatsoever.”