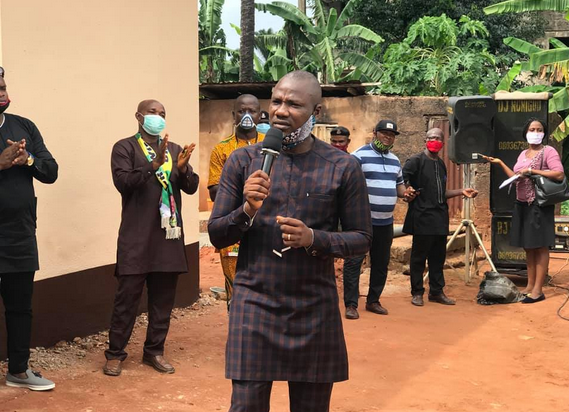 APGA Gubernatorial Aspirant, Nonso Smart Okafor has hosted the Chairmen and Secretaries of the party from the 21 Local Government Area of Anambra State telling them why he is better than all the declared aspirants.

Hon. Nonso Smart Okafor who hosted the Chairmen and Secretaries on Sunday, 2nd May, 2021, to intimate them of his Governorship ambition, said that the executives of the party at all levels remain the conscience of the party.

According to Okafor, their efforts and commitment to the party is what has continued to position APGA for electoral victory, noting that every effort should be made to ensure a free and fair primary on June 23rd, as that will ensure the smooth victory for APGA in the 2021 Guber.

Speaking further, Hon. Nonso Okafor who is also the Lawmaker representing Nnewi North in Anambra State House of Assembly, on the platform of APGA said that his ambition is not only predicted in his desire to consolidate on Governor Obiano’s achievements but also to build a viable, independent, secured, and advanced economy for Anambra State through his plan called VISA ECONOMY.

The lawmaker said that he has all the experience and capacity needed of one desirous of emerging the Executive Governor of Anambra State, revealing that as a state lawmaker with membership of eleven sensitive committees, he understands the potentials, problems, and challenges of the state, better than most aspirants in the party.

Okafor said that if elected by APGA delegates to fly the party’s flag in the November 6th election, the victory of the party is assured, noting that it will be a renaissance across the nation.

In addition, he announced that he will begin a tour of all the local governments in the state to meet APGA members in different wards in the state.

On their part, some of the APGA local government chairmen and secretaries who took turns to speak, praised Hon. Nonso Smart Okafor for his boldness and courage in deciding to contest the election, agreeing that to ensure APGA’s victory, the outstanding lawmaker should be considered for the ticket of the party.