Parents Of Abducted Kaduna Students Locked Out Of National Assembly 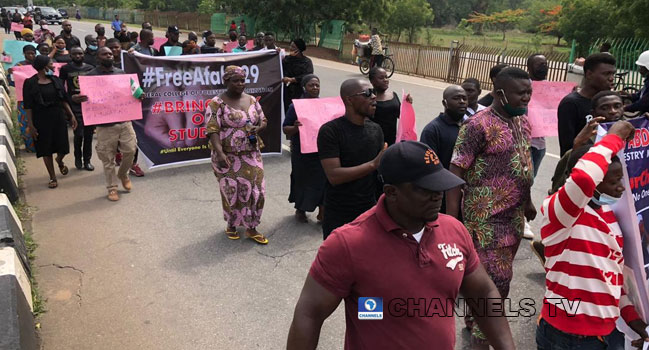 Parents of the abducted students of the College of Forestry Mechanization Afaka in Kaduna State have stormed the National Assembly complex, Abuja, in protest at the seeming government inaction on the case of their children.

The parents were, however, stopped from entering the National Assembly complex and were shut out at the gate.

The protesters included members of the Students Union Government (SUG) of the institution are lamenting over what they described as the negligence of the state and Federal Government in securing the release of the children.

The parents of the abducted Kaduna Students joined by well-wishers chanted songs of solidarity and displayed placards demanding prompt rescue of the students.

The protesters joined by the Publisher of Sahara Reporters, Omoyele Sowore and Deji Adeyanju had earlier gathered at the Unity Fountain before proceeding to the National Assembly complex.

On 11th March 2021, 39 students of the Federal College of Forestry Mechanization Afaka in Igabi Local Government Area of Kaduna State were abducted from their hostels by bandits dressed in military uniform.

Ten of the students were released in two batches of five each but 29 others have remained in captivity.

Related Topics:headlinesKidnapped Kaduna students
Up Next