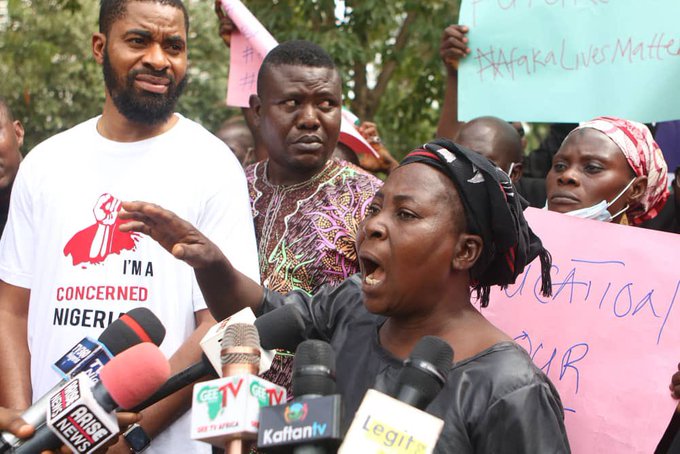 A Fulani agent of the kidnappers of the kidnapped students of the Federal College of Forestry Mechanization, Afaka, Kaduna State introduced by Sheikh Ahmad Gumi collected N800,000 from the parents as transport money to meet the kidnappers it was revealed on Tuesday.

One of the parents of the kidnapped students told Roots Television during their demonstration at the National Assembly complex that the agent after collecting the N800,000 told the parents to find the N500 million as demanded by the kidnappers.

The 29 students still in the kidnappers den were taken away from their school on March 11, 2021 along with 10 others who have so far been released.

Speaking to reporters outside the National Assembly complex where they laid siege after they were stopped, the parent of one of the students, a widow said:

“We had been going for several committee meetings; we were taken to meet Sheikh Gumi for a meeting. We were directed to a man called Ahmed who invited a Fulani man whom they gave N800,000. The money, we were told, was just for transport.

“I cried, I told him I am a widow and I don’t have a husband, I am just training this boy to help me tomorrow. I begged him and he said it was none of his business. We tried to begging and he said no, until we pay about N500 million,” the woman said.

Another woman at the protest ground said that the kidnappers who initially asked them to get the N500 million ransom from Governor Nasir El-Rufai said that upon the governor’s unbending stance asked the parents to mobilise for the money themselves. According to her, the kidnapper asked if they would abandon their children if the government failed to budge.

Restructuring Only Way Out For Nigeria – Bishop Okeke