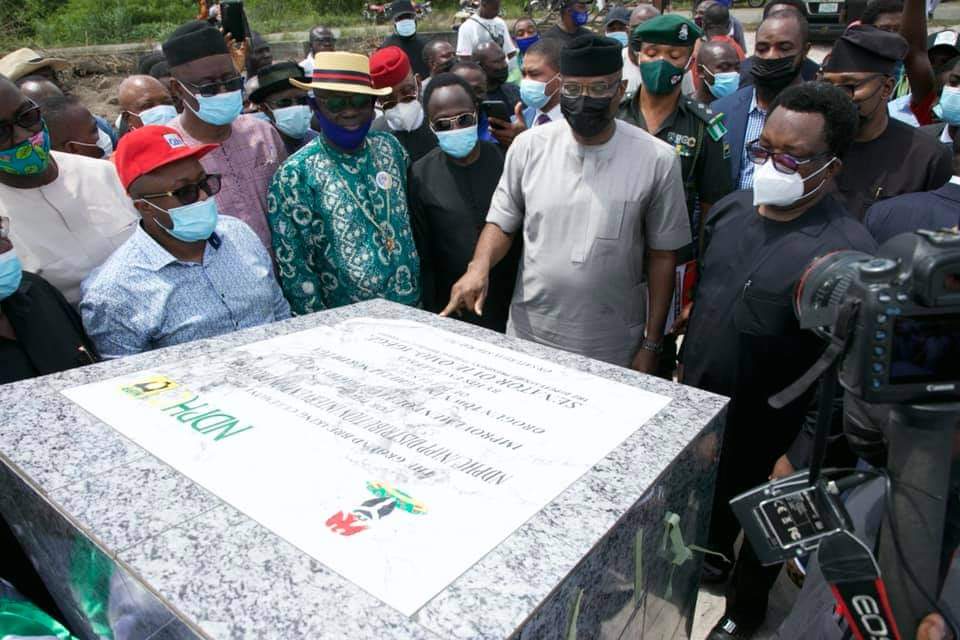 Just as the locals in Delta State would put it in the Warri variant of “Pidgin” English – “Senator Omo-Agege de finish work!”

Indeed, from all indications the Deputy President of the Senate, Senator Ovie Omo-agege epitomizes the statement due to his sterling achievements as mouthpiece of the great Urhobo nation of Delta Central senatorial district and indeed Delta State in the red chamber of the National Assembly since 2016.

Evidence of his accomplishments can be seen in the harvest of projects which cut across communities, towns and cities in the senatorial district where over one hundred and thirty projects have so far been constructed or rehabilitated, ranging from ultramodern water supply projects across the constituency to the provision of power, medical and educational facilities.

For instance, it was a thing of joy for the people of Omavovwe-Agharha community in Ughelli North local government area, when the office of Senator Ovie Omo-Agege constructed a Primary Health Care Center in the area, knowing full well the importance of such a facility to the wellbeing of the people at the grassroots.

The Senator also facilitated the provision and installation of dental and ophthalmological equipments to the Mariere Memorial Central Hospital, Ughelli for similar purposes.

The fact that water is life did not escape the shrewd politician, as he also embarked on the construction of ten thousand gallons, solar powered water supply schemes at Oghareki-Oghara in Ethiope West, Ugborikoko market in Uvwie and another at Ughelli main Market, Ughelli, amongst others.

This is in addition to the establishment of modern educational projects to inspire the younger generation of Urhobo boys and girls, such as the construction of an ultramodern ICT Center and provision of ICT equipments to Ovwian Secondary School, in Udu local government area. A similar project was also executed in Otor Ewu, in Ughelli South Local Government Area of Delta State.

Other educational projects by Senator Omo-Agege, include the design and construction of two blocks of three classrooms with toilet facility at Ugono Primary School, Orogun.

In addition to the rehabilitation of six blocks of classrooms at Oviorie secondary School, Oviorie Ovu, in Ethiope East local government area.

The school was also provided with benches to enable the students to have their studies in a comfortable setting.

However, top on the list of educational projects by the APC South-South leader, was the sponsoring and passage of the Federal Polytechnic Orogun Establishment Bill in February 2021, thereby ushering the take-off of the tertiary institution in Orogun with the prospect of rapid socio-economic development of the area.

The Delta Central Senatorial District witnessed an even greater harvest of projects, following the emergence of His Excellency, Distinguished Senator Ovie Omo-Agege as the Deputy President of the Senate of the federal republic of Nigeria on June 11, 2019.

Since then, scores of solar power projects have been splattered across the towns and cities of the senatorial district.

They entail the installation of solar powered street lights in communities such as Ugono, Urede, Erovie and Egbo Quarters in Ughelli north. Others are: solar powered street lights in Ibadan-Amukpe, Omiemiedi and Edekimoni in Sapele local government. While communities in Kokori Inland in Ethiope East, Ibori road in Ethiope West and Ebrumede Community in Uvwie local government area, were also not left out of the solar power installation spree by DSP Omo-Agege.

The Senator also identified power as a primary resource which could trigger a boost in economic activities in the area, thus he set his focus on the installation of transformers and other electrical equipment, which constituted the bulk of projects embarked upon by the political mastermind from Orogun clan of the Urhobo ethnic group in Ughelli North local government area of the state.

The power installation schemes by Senator Omo-Agege, include the connection of 500KVA transformers across locations like Ekpan Town Hall in Uvwie; Akpovi Street in Agbarho, Ughelli North; and Eyara in Ughelli South local government. Electricity transformers were also launched at Eko Akupke in Sapele; Oviorie in Ethiope East and in Edjemuoyavwe Ogharefe, in Ethiope West.

A 300KVA transformer was also installed at Osia Junction in Ughelli, among sixty three similar power installation projects by the senator.

Even recently, the people of Orhomuru-Orogun and environs in Ughelli North local government area heaved a sigh of relief following the launching of an Injection Sub-station in the area. The star project when completed is expected to energize the local economy and would come in handy to providing critical electricity supply to the newly established Federal Polytechnic, Orogun.

The Obarisi of Urhoboland has also used his influence as the leader of the ruling All Progressives Congress, APC in South South Nigeria, and a principal member in the National Assembly, to drive home the dividends of democracy not only for the people of Delta Central, but to other constituencies in Delta State.

An example is the facilitation of the recent rehabilitation of the Illah-Ugbolu-Asaba road in Oshimili North, in Delta North; with related collaborations in Delta South senatorial district.

Currently, Delta Central is perhaps one of the most peaceful regions in Delta State and the Niger Delta, thereby ushering the ideal environment for social economic development and the springing up of new opportunities for the people.

Thus, the masses rejoice as they enjoy undeniable first-class representation provided by the charismatic Deputy President of the Senate, His Excellency, Senator Ovie Omo-agege, and they are thankful that their mandate was neither wasted, abused nor asleep.