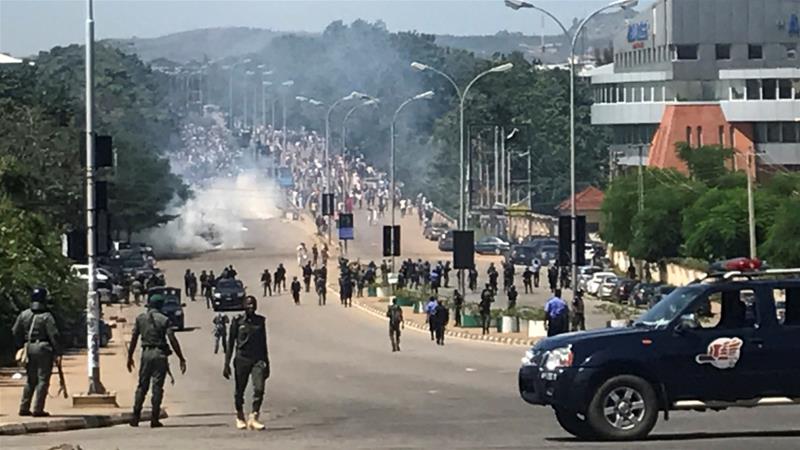 There is tension right now in Karu, a satellite town in Abuja as commercial motorcycle operators took to the streets to protest.

Although the cause of their protest in the Abuja suburb is not known, their action has forced many to stay indoors as the protesters are going about destroying vehicles and attacking innocent persons.

It was gathered that the riot which started at about 11:o’clock in the morning has forced many churches in their area to lock their gates asking their members to remain inside the church so as not to be attacked.

Already, soldiers and police personnel have been deployed to the area to maintain law and order are are currently battling the protesters who are fighting back with stones and other weapons.

Residents of Karu, Jikwoyi, Kurudu, Orozo, Karshi among other towns in the area are trapped as residents and motorists alike have been asked to keep off the route until normalcy is restored.

Daily Sun gathered that the Okada riders embarked on the protest after one of their colleagues was allegedly shot and killed by the police.

The protesters who gathered in their numbers embarked on a peaceful protest that later went violent, prompting the Commander Army Headquarters Garrison(AHQG), Major-General Dahiru, to deploy the soldiers in the Abuja suburb when the police could no longer handle the situation.

At the time of filing this report there is restriction of movement as people who went to church are still being trapped in their various churches on account of the protest in the Abuja suburb.

Also security personnel have been deployed to most of the churches to ensure the protesters to no burn the churches down.

When contacted, the public relations officer officer for the FCT police command confirmed the report and said the protesters were protesting the killing of one of their members by an unknown gunman.

She also said the police working in conjunction with the military were Donny everything possible to restore normalcy following the protest in the Abuja suburb.

The commander AHQG, told Daily Sun in a telephone interview that the soldiers would remain there until peace is restored in the area.