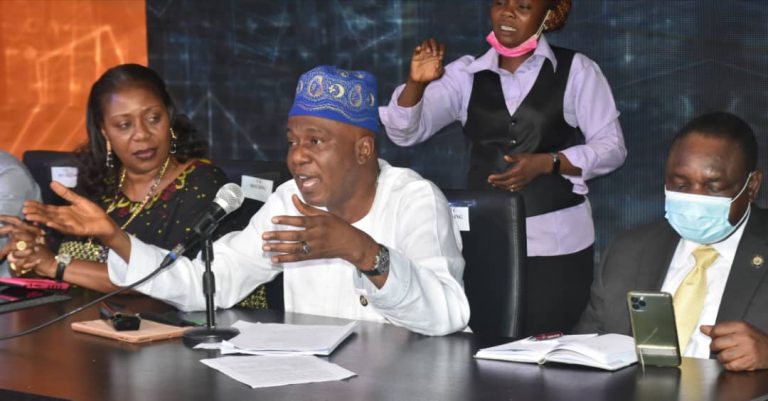 The Lagos State Government on Tuesday said it had recovered more than N50 million from parties involved in illegal real estate transaction activities.

Mrs Toke Benson-Awoyinka, Special Adviser to Gov. Babajide Sanwo-Olu on Housing, made the disclosure during a news conference in Ikeja.

It was to give an account of activities in the housing sector for the 2nd year anniversary of the Sanwo-Olu-led administration of the Governor.

Benson-Awoyinka said that the agency had successfully mediated in about 55 out of 150 petitions/complaints between property developers, landlords, potential tenants, and tenants.

She said that 50 cases were adjourned for further mediation while 40 were referred to appropriate agencies, with five cases in courts in Ketu, Ajah, Ikorodu, Gbagada, and Yaba.

The special adviser said that the Lagos State Executive Council had approved two critical bills as part of the state government’s efforts to sanitize and rebuild the industry.

She said the bills had been forwarded to the state House of Assembly before finally becoming laws.

“A public hearing on the amended LASRERA’s bill for the law to regulate real estate transactions and other connected purposes in the state with the State House of Assembly held on Dec. 17, 2020.

“The agency hosted the Chairman, Committee on Housing and members of the House of Assembly on a two-day retreat to clarify issues raised at the public hearing, ” she said.

According to her, the Lagos State Judiciary in collaboration with LASRERA has promised to expedite on court matters and issues relating to housing transactional fraud to obtain justice for defrauded members of the public on time.

Benson-Awoyinka noted that 77 real estate practitioners had so far been registered under the agency, although this did not represent the number of practitioners operating in the state.

The special adviser said that the details of the 77 registered practitioners had been uploaded on the LASRERA’s portal for the ease of business transaction for the general public and those in diaspora particularly.

According to her, the collation of the data will assist the state government to easily regulate the real estate market and protect members of the public from fraudulent real estate practitioners.

In his address, Mr Moruf Akinderu-Fatai, Commissioner for Housing, said that the COVID-19 pandemic had brought about a new dimension to housing development all over the world, including Lagos.

“Henceforth, our housing development will be taking into greater consideration, healthy living in both individual home units and community but strengthening provision of safe and potable water, sewage treatment plants and workable refuse disposable system.

“Community life within our future estate will also be reinforced so that even when distancing becomes mandatory, a strong sense of belonging will make people thrive and heal faster even in times of adversity, ” he said.

The commissioner emphasized that the Sanwo-Olu administration was determined to reduce the number of individuals and families who lack affordable, stable, decent, and quality housing.

Akinderu-Fatai said that the state was determined to upgrade decaying housing stock and provide more homes for the working-class people who oil the machinery of progress in the state.

“In addition, we are digitalizing our systems, enhancing the capacity of our artisans, and perfecting our financing mechanism that addresses the financial problems of both developers and prospective homeowners, ” he said.

Related Topics:Fraudulent Estate
Up Next