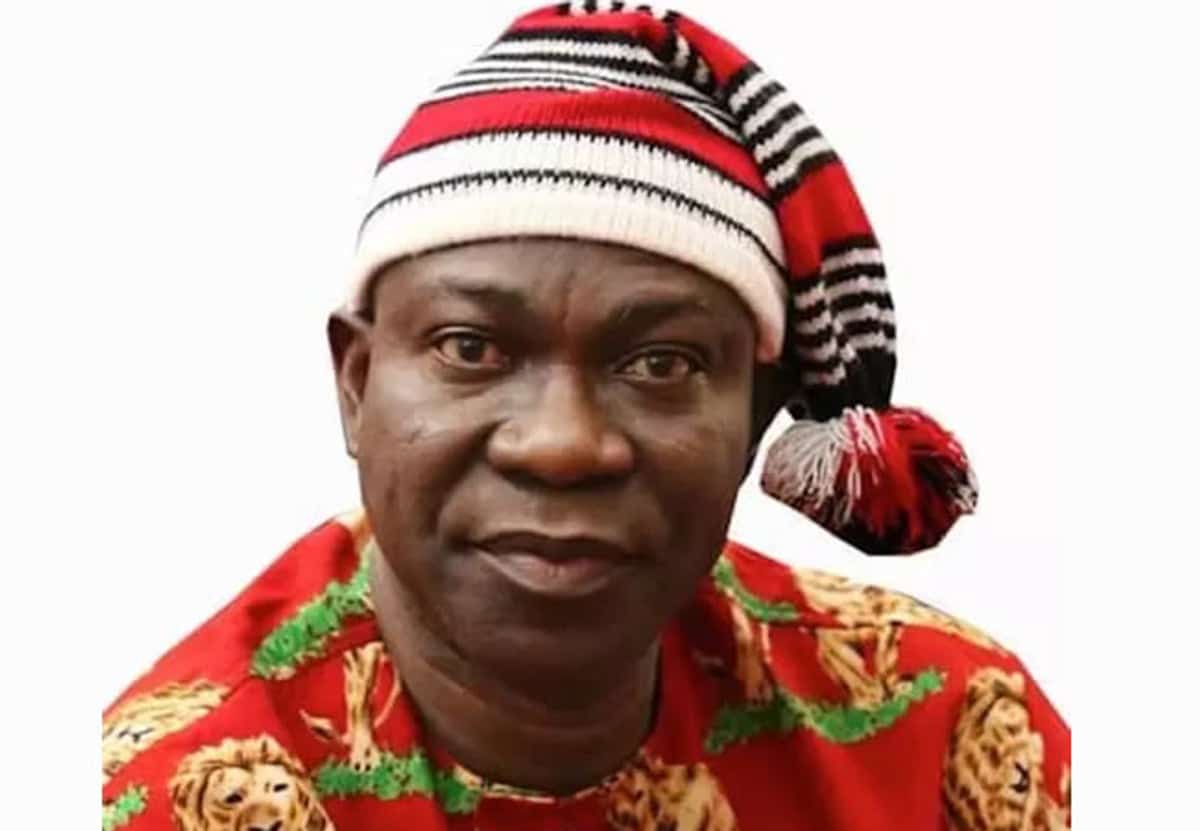 On the occasion of the 59th birthday of Senator Ike Ekweremadu on May 12, 2021, Mr. Uche Anichukwu traces the political odyssey of the political icon from his days at  Aniri Local Government Area, through the extreme political gyrations of the Chimaroke Nnamani years, to his political emergence as a statesman in Abuja and the international arena.

Names such as Chinedum (God leads me), Chibuike (God is my strength), Mmaduabuchi (No man can successfully play God), Chidera (God has the final say or what God has written is already written), Osinanchiadimma (God bestows good fortunes), etc. underscore Igbo’s belief in the supremacy of God in the affairs of men.

Nevertheless, they believe that one should not imitate the praying mantis that went to sleep because her co-wife promised her some pounded yam. She did not as much as venture into her mate’s hut to find out if the food was ready. She kept stretching her neck in expectation. That was how the praying mantis developed a long, lean neck from hunger and protracted giraffing.

In Chinua Achebe’s Things Fall Apart also, Unoka, the loafer father of Okonkwo, clears the farmland when others are already planting. He flutes away his time. Expectedly, he is debt-ridden and without a title or a place of honour among real men in Umuofia. He dies a man whom Okonkwo is too ashamed to identify with as his father.

However, there are many, who, like the great men of Umuofia, are not just on a rendezvous with destiny, but whose cocktail of determination, courage, vision, intellect, humility, and industry also blend with grace and destiny in perfect proportions. Each time destiny leads opportunity to their doorsteps, it always finds in them willing and well-prepared partners, even if disguised as humble responsibilities. Senator Ike Ekweremadu is one of such men.

At a valedictory service for a set of graduating secondary school students of Boys Secondary School, Umueze Awkunanaw, Enugu State around 1980, the officiating priest had asked the young men to ask God for anything as they began their journey into the world. The young Ekweremadu scanned the circumstances around him, his hometown, and locality with his mind’s eyes and prayed Jabez’s kind of prayer: “Oh, that you would bless me and enlarge my territory; that thou would use me as an instrument of transformation for my people and I would in return build a place of worship for You”. Anybody who has followed his political rise or knew Mpu and Aninri in particular as well as Enugu West in general before the rise of Ekweremadu would agree that God is a keeper of covenants indeed.

As a nine to 10-year old boy, Ekweremadu’s mates in Mpu had already elected/appointed him Chairman of their age grade association. As he grew into a man, the people of Mpu, on their own, beckoned on him to lead the community as the town union President General. He occupied the position for so many years at the pleasure and insistence of the community.

In 1996, he was the secretary of the movement for the creation of Aninri LGA to bring development to the towns of Ndeaboh, Mpu, Oduma, Okpanku, and Nenwe. He was also chosen to make Aninri’s presentation before the visiting Abuja panel. Upon the creation of the local government by the Gen. Sani Abacha regime, thanks to people like the late Prof. Samson Ukpabi, a delegation of Aninri elders came to him with a message to provide leadership for the new LGA as its pioneer elected Chairman. He contested and won the Council election in 1997.

The Military Administrator was shocked to meet and commission a brand a new Council secretariat at Ndeaboh, the Aninri LGA headquarters during his tour of local governments in Enugu State. He was even more surprised that Ikeoha did not take any loans to accomplish such feat. Ekweremadu was voted the Best Council Chairman in 1997 and the footprints of that stewardship are still very visible till date.

Upon the sudden dissolution of the Councils by General Abdulsalami Abubakar, following the death of General Sani Abacha, Ekweremadu re-contested for the position during Abdulsalami’s transition to civil rule programme in order to continue with his good work, but was practically stopped through brigandage, escaping death by the whiskers. However, that loss was actually destiny taking him on the path of higher political ground.

To cut a long story short, Ekweremadu was later to link up with Dr. Chimaroke Nnamani and became the Director-General of his governorship campaign organisation. Nnamani had during a January 2019 visit by Ikeoha narrated how he found himself in a fix in finding a role for Ikeoha in his government after the election as some powerful political forces blocked the position he was pencilled down for in a pre-election understanding. Worse, although Ikeoha could have taken Enugu’s ministerial slot as requested by Chief Olusegun Obasanjo, he (Nnamani) said he felt Ikeoha would be key to the success of his administration. Thus, that slot was given to Chief Dubem Onyia, who was second on the list.

As he rode in the same car with Ekweremadu from the old Governor’s Lodge to the Government House one day (around Bisala Road), the Radio Nigeria network news announced the appointment of a Chief of Staff and a spokesperson by Obasanjo. Greatly relieved that he finally found a role for Ikeoha, Nnamai immediately took a cue from Obasanjo, appointing Ikeoha the first Chief of Staff to a governor in Nigeria. Governors used to have only Principal Secretaries.

Ekweremadu emerged the Secretary to the Government (SSG) in a dramatic fashion when that position became vacant in the course of Dr. Nnamani’s first tenure in 2001, as he strongly declined. Another person, who later became the Attorney-General during Governor Sullivan Chime administration, was picked. Ekweremadu was seeing him off after the kitchen cabinet meeting, hoping to head to the Enugu State Broadcasting Service to submit the new appointment for announcement. But on their way out of the Lion Building, the man said he didn’t want the office, as it would appear that he masterminded Chief Onyemuche Nnamani’s removal. Consequently, Ikeoha was appointed the SSG despite his initial refusal.

Senator Adolphus Wabara was favoured by the Peoples Democratic Party (PDP) leadership as the President of the 5th Senate, leading to the withdrawal of other interested persons. Ekweremadu also lost the contest for the Senate Presidency to his kinsman, Senator Ken Nnamani, following Wabara’s removal in 2005. But ahead of the inauguration of the 6th Senate in 2007, the position of the Deputy President of the Senate landed on his laps. It was the late Senator Kanti Bello (PDP, Katsina), who came to inform him that party leaders had chosen Senator David Mark as incoming President of the Senate, while also endorsing him (Ikeoha) as deputy on the recommendation of Mark, who spoke so highly of his brilliance and unalloyed loyalty to his Governor, Nnamani, in the 5th Senate.

However, Ekweremadu once told the story of how the former Chairman of PDP BoT, the late Chief Tony Anenih, invited him to a breakfast meeting a day to the inauguration of the 6th Senate. Anenih informed him that party leaders and President Umaru Yar’Adua had changed their minds. Senator George Akume would now become the President of the Senate, also with Ekweremadu as his deputy. But Ekweremadu respectfully declined and asked that leaders should as well get another Deputy for Akume because he could not in good conscience abandon Mark at that point. Although deserted by many, both men, through God’s grace of God and strong support of some party leaders and their colleagues turned things around. Mark beat Akume 68 to 39 votes, while Ekweremadu emerged unopposed. The rest is history.

Ikeoha was re-elected unopposed as Deputy President in 2011. In this capacity and having earlier served as a First Deputy Speaker, ECOWAS Parliament, it was another date with destiny for him, as he was also unanimously elected as Speaker of ECOWAS Parliament when it was Nigeria’s turn to occupy the office in 2011. Since the office rotates among the 15-member nations in alphabetical order, it would take about 60 years from the end of Ekweremadu’s tenure in 2015 before another Nigerian occupies the seat.

After PDP’s devastating loss of the presidency and majority status in the National Assembly in 2015, some political rivals and pundits declared that it was the end of the road for Ikeoha. But he re-emerged Deputy President of the 8th Senate as an opposition leader in an intrigues-soaked politicking. Then, they said he would not survive more than six month. But God saw him and Senator Bukola Saraki through the tribulations and diabolical political machinations, while he also showed himself a truly principled politician by refusing to abandon his party at its most trying period. Instead, he dug in and fought for PDP’s eventual revival.

Indeed, running for dear life with family and surviving the civil war, which broke out when he was about five, disappearing from his father’s home years after the war on a day he was to be taken for apprenticeship by a trader (whereas he preferred to continue his education) and reappearing a day after, buoyed by destiny, benevolent spirits and destiny helpers; equipped with LL.B, B.L, LL.M, PhD. (Constitutional Law), fortified by experience, and armed with enviable record as the longest serving presiding officer, the question on the lips of many as Ikeoha clocks 59 on 12th May is: What next?

As Ikeoha rightly stated during a radio interview in Enugu last year, this is a question, which even himself cannot answer. As a man on a journey with destiny, his future is in the hands of God.

Anichukwu is Media Adviser to Ekweremadu