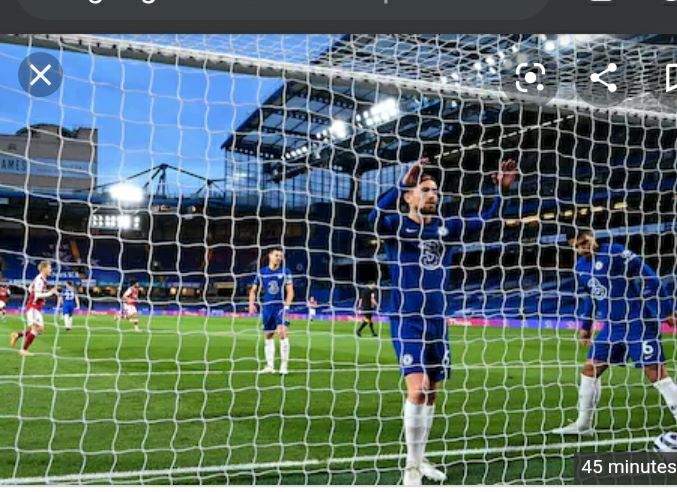 Arsenal got the first league double on Chelsea in 17 years on Wednesday night giving a little hope to the team’s qualification for European action in 2021/22 season.

Chelsea started the game brightly as they had the first two chances of the game. Mason Mount’s effort inside the box was saved by Bernd Leno before Kai Havertz stole the ball from Pablo Mari in midfield, ran with the ball inside the box and blazed the ball over the bar.

Those opportunities came in the opening ten minutes of the duel.

Missed chances would come back to haunt them when Emile Smith Rowe capitalized on a defensive mix-up by Chelsea involving a poor back pass by Jorginho which nearly went into the net.

Keepa stretched to save it from going in but the ball went to the path of  Pierre Emerick Aubameyang of Arsenal who set up Smith Rowe for the easiest of finishes.

Mason Mount and Pulisic attempted to find the equalizing goal, however, they were unsuccessful.

In the second half, Chelsea still looked the sharper of the two sides and thought they had levelled matters, only for Pulisic’s goal to be disallowed correctly for offside in the 61st minute.

To add to Chesea’s ill luck on the night, Kurt Zouma and Olivier Giroud’s quick fire efforts were kept out by the frame of the goal in the closing moments of the game.

Arsenal had all their players behind the ball and defended doggedly until full time. Arsenal’s win at Stamford Bridge came with a slice of history as they recorded a league double over Chelsea for the first time in 17 years and kept their European dreams alive.

On the flip side, Thomas Tuchel will be unhappy with the result of the game against Arsenal due to the fact that a Champions League spot is at stake if the team makes any further slip.