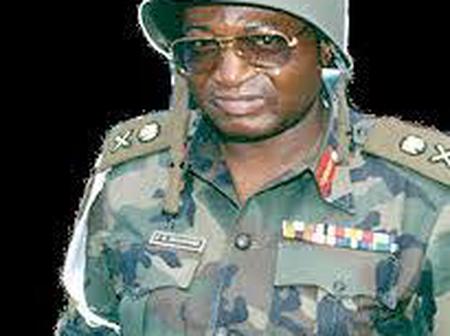 Lt-Gen. Joshua Dogonyaro, the man who announced the removal of Major-General Muhammadu Buhari as military head of state on Sallah Day, August 27 1985 has died at 80. He remarkably died on Sallah Day, 2021.

Dogonyaro made his famous coup statement removing Buhari in the morning of August 27 before General Sani Abacha, followed up by announcing Gen. Ibrahim Babangida as the new military president.

Dogonyaro had in his coup statement accused Buhari of frustrating the change that the December 21, 1983 coup was conceived to effect. He said that though Buhari was made the head of state but that his actions frustrated the same change that they campaigned to bring.

Fellow country men, the intervention of the military at the end of 1983 was welcomed by the nation with unprecedented enthusiasm. Nigerians were unified in accepting the intervention and looked forward hopefully to progressive changes for the better. Almost two years later, it has become clear that the fulfillment of expectations is not forthcoming.

Noting the lack of coordination in the affairs of the Buhari government, he said:

“No nation can ever achieve meaningful strides in its development where there is an absence of cohesion in the hierarchy of government; where it has become clear that positive action by the policy makers is hindered because as a body it lacks a unity of purpose.

“It is evident that the nation would be endangered with the risk of continuous misdirection. We are presently confronted with that danger. In such a situation, if action can be taken to arrest further damage, it should and must be taken. This is precisely what we have done.”

The death of the retired general was disclosed by Joseph, first son of the deceased to the News Agency of Nigeria (NAN) in a telephone interview in Pankshin on Thursday.

“Daddy has been sick for some time until yesterday when he had a stroke and we rushed him to the Jos University Teaching Hospital (JUTH) for medical attention.

“Unfortunately, early this morning (Thursday), around 3.00am precisely, he breathed his last.

“His death comes as a rude shock to us as a family. We are going to miss his love and warm as a grandfather, father, brother, uncle and supporter,” he said.

Joseph said that the family was trying to cope with the shocked of the general’s demise and would discuss the funeral arrangements soon.

He described his father as “a General who was so faithful and loyal to the nation, Nigeria.”

“He was a general who had no bias mind as a detribalised Nigerian. He served this nation faithful and identified with all Nigerians and Africa as a continent.

“We and Nigerians are going to miss him having served humanity in this country and Africa as a whole, ” Joseph said.

According to him, the corpse of the general has since been deposited at the JUTH mortuary.

Late retired Lt. Gen. Dogonyaro, a soldier and an administrator, was born on Sept. 12, 1940 in Vom, Plateau State, though a native of Taroh in Langtang North Local Government Area.

Dogonyaro had his early education at Boys’ Secondary School, Gindiri, and there after was enlisted in the Nigerian Army, 1964.

Between 1984 and 1985, he was made the Task Force Commanding Officer, 203 Armoured Battalion on the Peace-keeping Force in Chad; Director of Manning (Army), Army Headquarters, ‘A’ Branch, N.A and Director of Armoury, 1985.