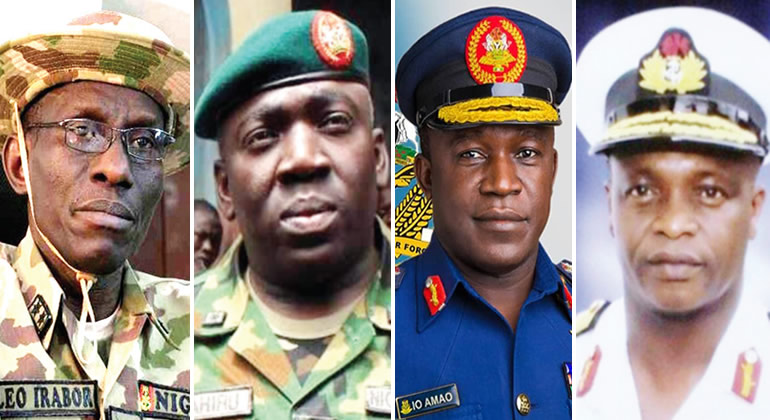 The service chiefs appointed more than a hundred days ago by President Muhammadu Buhari met an alarming level of insecurity and social tension across the land which had bruised and mercilessly battered every sector of the economy.

So terrible is the state of affairs, that President Buhari’s did not mince words when he told them to speed up actions towards liberating the country from the current grip of insecurity. He said they have a short time to deliver.

With a very clear understanding of their mandate, visits were made to the North-East where they met with Governor Babagana Umara Zulum, senior government officials, traditional leaders, troops and other key stakeholders, where they had brainstorming sessions with a view to finding solutions to the insurgency.

The military has also been geared towards a new ‘leadership philosophy’ laden with the potential to rebrand approach towards contemporary issues.

He said he is looking forward to a defence organization where personnel contribute on the basis of their knowledge, hard and soft skills, as well as humane aptitudes.

The CDS said he would advocate for competence, skills and experience, diligence and commitment, decisiveness, honesty, integrity, trust and passion for service.

According to him, expected results are best achieved out of a clear vision of success and a well-articulated plan of action.

This, he said, shall involve a controlled system of shared and expanded responsibilities across the entire system, but pinnacled at the office of the CDS.

He stated: “Devolving from national grand-strategic direction, I shall give military strategic and operational guidance to the AFN.”

“In this regard, the broad outline of my leadership focus shall be “To foster a Professional Armed Forces capable of effectively meeting constitutional imperatives”. This broad focus shall be anchored on PEARL as tenets going forward.

“I shall seek to build the AFN which is Professional, Effective, Agile, Result-oriented and Loyal to the constituted authority as emplaced by the Constitution (PEARL), in concept, shape and outlook.

“I am convinced that the AFN under my leadership can and will emplace  a suitable security environment in the shortest possible time, if we act collectively, decisively and clearly with passion, commitment, integrity and perseverance to achieve our aims and objectives.”

In view of the transnational nature, scope and implications of many contemporary national security challenges, Irabor assured that he will promote international military cooperation and collaboration, as well as combined responses and action, through proactive and virile defence diplomacy.

In all theatres of military engagement, he pledged to consult with relevant stakeholders to set Specific, Measurable, Attainable, Relevant and Time-Bound military objectives.

He also vowed to promote synergy and mission command as essential elements for operational planning and execution for all security challenges requiring military intervention across our dear nation.

His words: “I shall also promote active cooperation and collaboration between the military and other relevant stakeholders, key players, departments, agencies and organisations in aggregating our overall national resource endowments to comprehensively deter, counter, overcome or resolve all security challenges across the nation requiring military intervention.”

Stakeholders have also met during a one-day ‘National Defence and Security Summit’, at the DHQ, in Abuja to chart a way out of the security challenges..

The CDS at the summit with theme “Promoting Kinetic Operations as a major Plank for Counter Terrorism and Counter Insurgency in Nigeria” need for kinetic operations to deal with prevailing security challenges, confronting the nation got the nod of the participants.

Again, the DHQ, under Irabor, recently endorsed the Armed Forces Gender Policy, clearly targeted at giving female military officers and soldiers optimal regard and consideration in both recruitment, and promotion exercises, together with leadership appointments in the armed forces.

Taking a humanitarian perspective, the Armed Forces has also pledged support to organisations working towards programmes that will enhance troops’ physical, psychological and mental wellbeing.

The physical and psychological well-being of the officers and men of the military, without doubt will make or mar ongoing operations.

Therefore, the initiative of Defence and Police Officers’ Wives Association (DEPOWA) towards executing humanitarian programmes that would be beneficial to families of military personnel is highly welcomed.

Prime among these projects are the establishment of Post Traumatic Stress Disorder (PTSD) centre for military personnel and families, as well as a Diagnostic centre in honour of Dr. Stella Ameyo Adadevoh, who diagnosed the first Ebola case in the country.

No doubt, personnel who face traumatic experiences will feel happy with the proposed PTSD project, which would significantly shore up the fighting spirit and psychological well-being of military personnel.

In crisis times, both troops and their families undergo emotional trauma in the task of defending and protecting the nation against adversaries.

The morning after Gen. Irabor’s emergence as CDS did not see to the swift extermination of lingering security challenges bedeviling our country, but it has seen the advent of deliberate and intelligent measures evolved to address insurgency, kidnapping and other sundry crimes. It is only a matter of time before the results become evident.

Till then, he needs the support of not only the officers and men of the armed forces, but the fervent prayers of all patriotic Nigerians.

Okowa And His Southern Governors’ Declaration