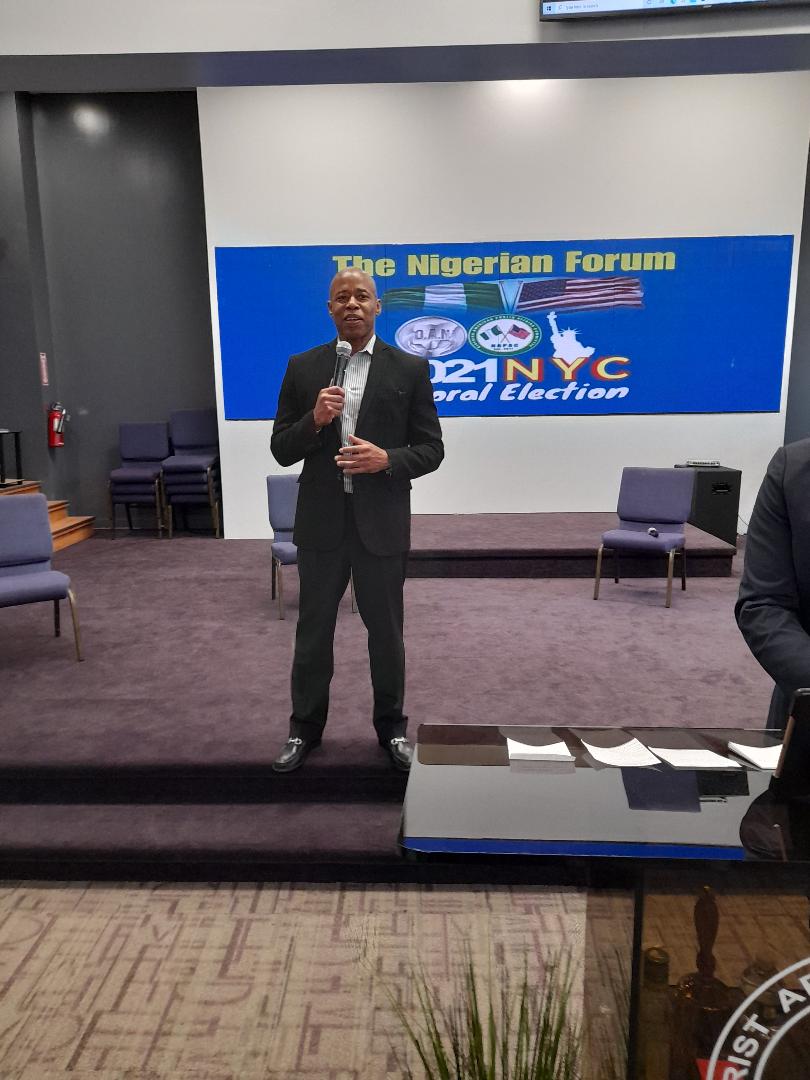 Eric Adams at a debate organised by the Nigerian Community

The debate was convened by The Nigerian Forum, a coalition of the Organisation for the Advancement of Nigerians (OAN) and the Nigerian-Americans Public Affairs Committee (NAPAC), a political action committee.

The New York City mayoral election is very competitive and strategic due to the city’s diverse nature and an annual budget of about US$ 100 billion, the largest municipal budget in the U.S.

The News Agency of Nigeria (NAN) reports that no fewer than three Nigerians are contesting in the city council’s elections.

The Nigerian community is therefore positioning itself as an organised and important voting bloc that has enough weight to pull support for a candidate whose agenda resonates with the community.

Chairman of NAPAC New York, Mr Gbenga Omotayo, said that the debate aimed to discover the agenda of each candidate so as help make an informed choice about whose agenda would best support the Nigerian community.

Omotayo said a lot of issues affects Nigerians in the city, adding the candidate whose agenda best addresses the issues would secure the Nigerian community’s support.

“We have a vision to make sure that our children get to wherever and whatever level they deserve and desire.

“We are going to use some criteria to determine who we should work with and whoever we go with it, by the grace of God, is going to be the next New York Mayor.

“When he is there, we are going to make demands of him; gone are the days when Nigerians were pushed aside. We don’t want that to happen any longer,’’ he said.

Omotayo also canvassed support for Nigerians contesting for New York City Council positions, saying, “we have our brothers contesting, we will support them”.

Aluya said: “New York has a role to play, not only for us as Africans or for us as Nigerians but also for us black people.

“We must begin to put our differences aside and come together to achieve result.”

Also speaking, Dr Bola Omotosho, who moderated the forum, said the goal was for Nigerians to hear first-hand from the candidates as a voting bloc in New York.

Omotosho, a former Democratic candidate for New York City Council, said “New York is a melting point of the world and the city is very important to the Nigerian community.”

He added that the forum would afford Nigerians the opportunity to ask questions, noting that “New York is a very diverse community and whoever becomes its next mayor will inherit a lot of responsibilities.”

The News Agency of Nigeria (NAN) reports that Eric Adams, a leading mayoral candidate in the polls, pledged “to deliver the prosperity of New York to the Nigerian Community in the city”.

Adams, current borough president of Brooklyn, said education, security and wealth creation as well as health would be top on his agenda, noting that he had supported the health sector in Nigeria by establishing a clinic in Lagos.