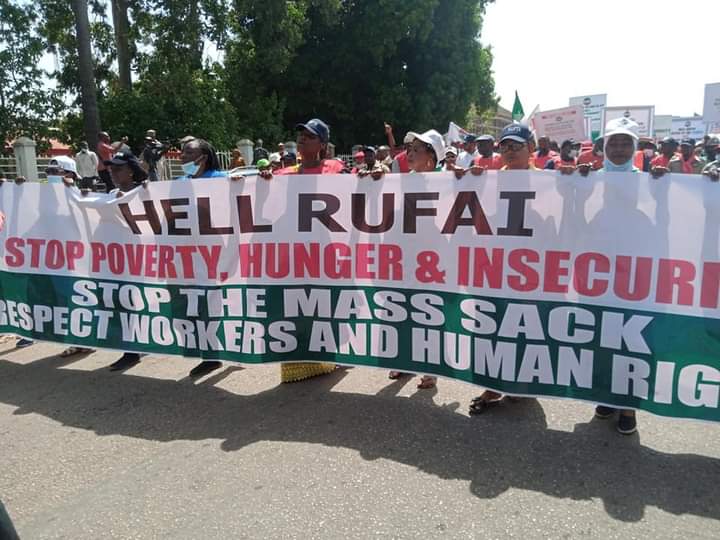 The five day warning strike was suspended on Wednesday according to NLC national president, Ayuba Wabba following the intervention of the Federal Government.

GreenWhiteGreen GWG reports that the strike had paralysed government and commercial activities in Kaduna State and heightened tension in the polity following the hard stance taken by labour and the Nasir El-Rufai administration in Kaduna.

NLC president, Wabba, who gave notice of the suspension of the Kaduna strike following an emergency meeting said the decision was taken following the intervention of the Federal Government.

Before he spoke, the minister of labour and productivity, Dr. Chris Ngige had given notice of the Federal Government’s intervention.

Similarly, the minister of information Alhaji Lai Mohammed speaking after the meeting of the Federal Executive Council also echoed the federal administration’s intervention.

“The federal government is not folding its arms and already the Minister of Labour and Employment has waded in and is in touch with both the government of Kaduna State and also the Labour. In addition, the security apparatus all over the country have also taken pre-emptive measures to ensure that hoodlums don’t take advantage of this situation.

“In particular, I know that the police have reinforced its patrol between Kaduna and Abuja, so that we do not witness kidnappers taking advantage of the situation.”

“Overall, I think the federal government is quite concerned and is doing its best to see how the two parties can resolve their misunderstandings amicably, with little loss to productivity, little loss to properties. At the end of the day, all the parties have to come back to the drawing table to agree and hammer out concessions and agreements,” the information and culture minister, Lai Mohammed had said.