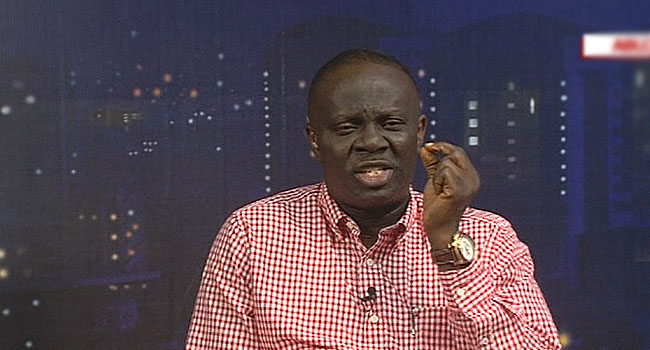 Prince Kassim Afegbua, instigator of the petition that has brought the national chairman of the Peoples Democratic Party, PDP, Prince Uche Secondus under probe of the Economic and Financial Crimes Commission, EFCC has been expelled from the party by the Edo State chapter of the party.

Afegbua in an immediate riposte dismissed the action which he alleged was orchestrated by the national leadership as a way of derailing his campaign against the alleged indiscretions of Prince Secondus.

Replying to the expulsion, Afegbua vowed that whether as a member or outsider that he would sustain his petition against Secondus.

GreenWhiteGreen GWG reports that Afegbua had raised serial allegations against the Secondus leadership relating to finance and capacity on the part of the national leadership.

He had alleged misuse of an alleged N10 billion raised from the sale of nomination forms by the Secondus leadership, an allegation that has been debunked by the party’s spokesman, Kola Ologbondinyan. The party spokesman in response to that said that the party’s collections from sale of forms fall short of the amount raised by Afegbua.

Responding to him in an expulsion letter dated May 17, 2021, the Edo State chairman of the party, Dr. Tony Aziegbemi in a letter addressed to the national chairman, Secondus, and entitled “Re: Resolution of the expulsion of Kassim Afegbua as a member of PDP,” said that Afegbua refused to respond to queries issued to him.

“Mr Kassim Afegbua as a member of PDP hitherto engaged in series of anti-party activities in his ward before and during Edo State Gubernatorial election of September 19, 2020.

“All attempts by his ward, Local Government Area and State Disciplinary Committees to secure his attendance at various meetings to clear himself of all allegations proved abortive.

“I hereby forward herewith to you the expulsion of Mr Kassim Afegbua as unanimously affirmed by the State Disciplinary Committee of our party in Edo State.”

But responding in a statement made available to  GreenWhiteGreen GWG, Afegbua vowed not to relent in his pursuit of Secondus.

First and foremost, it is a blatant lie that I was ever invited to any disciplinary committee. The state chairman is just acting the script of one Uche Secondus who is desperately making effort to carry out a misplaced political vendetta because of my petition to the EFCC to seek accountability and transparency.  Secondly, a so-called state disciplinary committee cannot shave my hair in my absence,  knowing full well in their heart of hearts,  that no invitation was extended to me to answer to any query whatsoever. When some executives sit down in the comfort of their homes to generate an expulsion of someone you have not tried, in line with the relevant provisions of the party’s constitution, it goes to show how hollow and pedestrian the party has become in the hands of a few who see it as their meal ticket.

Once I get the letter,  I will immediately instruct my Lawyers to seek legal redress of this absurdity,  just to make the point that illegality should not endure. Linking my purported expulsion on the basis of my role in the September 2020 election is not only ridiculous, laughable and draconian,  it exposes the dubiety of a self-serving system that leaves a sour grape in our mouth. It is not only anachronistic to note that a party that is in opposition, that ought to apply the best and finest tradition of legality and justice in handling issues of internal democracy,  is, by its nebulous action,  caught pants down in charting the path of self-aggrandizement. This kind of stereotypical verbiage is only possible in a party run by jungle justice and persons of warped intellect buoyed by obtuse reasoning.

If this ridiculous, laughable and purported expulsion is meant to dissuade me from pursuing my call for transparency,  accountability and probity in the management of the party’s resources,  let it be known that I will pursue my call to a logical conclusion. No amount of gestapo or arm-twisting strategies or tactics can blur my vision to take the party’s leadership to the altar of accountability in the management of public finances,  as captured in the PDP.  Whether as a private citizen,  bona-fide member of a party or voter,  I have the inalienable right to raise concerns whenever I suspect that there are foul plays.  Instead of subscribing to their oath of office to live above board,  and by extension submit to the investigation presently ongoing by the EFCC,  the Edo chapter of the PDP is being railroaded, armtwisted, cajoled and prevailed upon to embark on illegalities that cannot stand the test of justice and fair play.

I need to re-emphasise the point that the Uche Secondus-led leadership of the party has outlived its usefulness and become grossly incompetent to lead the party in the face of our present political emanations. A virile opposition that is desirous to make an impact in the forthcoming elections cannot, by any stretch of imagination,  parade the present lacklustre leadership. My call remains unequivocal, altruistic, holistic and utility-driven. No amount of blackmail and ambush can dissolve my resolve to follow the path of good conscience in pursuit of public good. The procedure for expelling any member is well captured in the party’s constitution, from the Ward,  Local Government and State Working Committee,  after exploring all the issues raised and the member,  being made to provide response to the issues. Waking up from your dream and expelling any member without following the procedure is barbaric, ridiculous,  illegal, self-serving and utterly reprehensible.

Breaking: Wike Offers To Resign If…