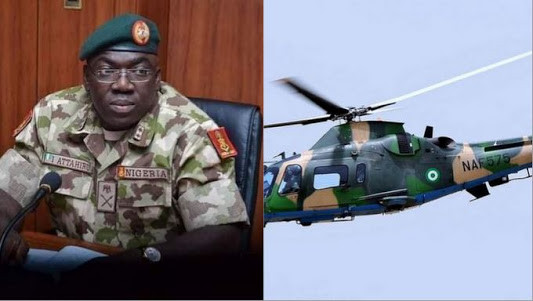 Residents of Mando Community close to Kaduna International Airport say that they are in shock about Friday’s plane crash in which the Chief of Army Staff, Lt.-Gen. Ibrahim Attahiru died alongside 10 other officers.

They also raised concerns over the safety of their lives and property in their community.

A correspondent of the News Agency of Nigeria (NAN) during a follow-up to the incident on Saturday reports that although the residents mourned with families of the bereaved, the crash left them in shock, while they also worried over the safety of their lives.

The residents urged authorities concerned to ensure proactive measures to avoid such unfortunate incidents, as well as guarantee, safety of their lives and property.

Malam Abdullahi Samaila, a civil servant who resides at Mando, said that the crash occurred around 6p.m. as they heard a loud noise, which was accompanied by smoke from a few kilometres away.

“When I heard the noise, I initially thought it was an air strike but later realised the unfortunate crash.

“Our wives and children are still in a state of shock and have remained indoors since morning,” he said.

Samaila, who regretted the sad development, urged the Military and aviation authorities to develop proactive measures that would avert similar occurrence.

Also, Mr Peter Gambo who resides close to Water Resources, Mando, told NAN that the incident threw his neighborhood into a state of pandemonium.

“Unfortunately, Kaduna is so volatile that any bang would easily be mistaken for an attack,” he said.

Mr Dauda Ibrahim, also a resident of Mando, prayed for the repose of those who died in the crash abd urged residents who lived in prone areas, to consider relocation, for fear of the unforeseen.

“We can only take consolation that it is only God that protects, no matter where you live.

“My advice for those afraid of being victims, is to simply relocate to other parts of the metropolis, otherwise continue to pray for God’s protection,” he said.