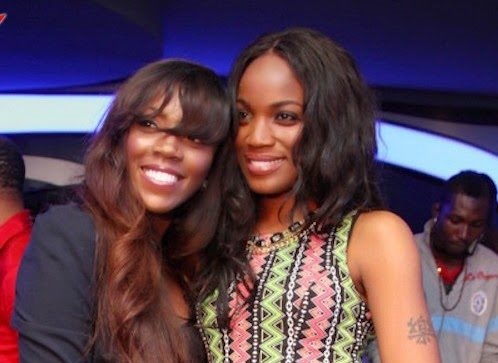 Yesterday, social media was agog with news of singers Seyi Shay and Tiwa Savage causing a scene in a salon. In the video which surfaced online, Tiwa was seen warning Seyi to back off and stay out of her business.

However, Seyi Shay has come out to tell her own part of the story. Here’s what she has to say:

“Since the Fv ck You Challenge, we’ve seen each other in different places. I’ve said Hello, she said Hello back. We’ve even entered the same private jet together. We’ve taken pictures together.

She’s definitely angry about something, but It cannot be the fv ck You Challenge. After how long.

The part I did not see on Tunde Ednut’s post was when she said ‘Seyi you won’t give birth. God won’t give you a Child. I know you’re looking for a child’. She said it in Yoruba. It hurt me because I’ve had a miscarriage before.

I didn’t respond because I wanted everything she said to be clear. Common, I said Hello to you, you said Hi back, we exchanged pleasantries, I walked away, you came back 20 mins later.

Who told her I was looking for a child. Is she stalking me?. I guess it’s those recent pregnancy rumours between her and her boyfriend.

This is the same person that went to sing my song. One of her biggest songs ever, ‘Mr Lova Lova’. I co-wrote that song. I called her to tell her to give me my credit. She said No, she doesn’t believe I co-wrote it. That the song is out already. I recorded the whole conversation.

This is the same girl that went to attack a popular male artist we all know for featuring on one of my songs, and featuring on her song too.

This is the same girl that went to approach a very big brand that we all know, and threatened to take them to court unless they take me off the ambassadorship because she was pregnant at the time.