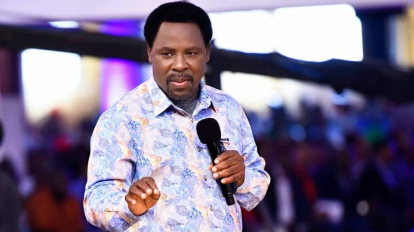 The late founder of the Synagogue Church of All Nations, Pastor Temitope Joshua is to be buried on July 9, 2021, on the premises of his church in Lagos State. A move which doesn’t sit well with members of the extended family.

Recall that Joshua died last week in Lagos State at the age of 57.

The decision was made after the immediate and extended members of the family of TB Joshua met on Friday to discuss issues regarding the burial.

Members of the deceased’s extended family had sent a delegation led by the Zaki of Arigidi Akoko, Oba Yisa Olanipekun to meet with his immediate family as well as the church to demand that his remains be buried in his hometown like other late clergymen of Akoko origin.

The monarch had earlier said the remains of the prophet should be buried in Arigidi.

“God knows best because somebody like Balogun Joshua doesn’t last. But he has accomplished his mission on earth.

“We can handle all his burial arrangements, not only Arigidi but all the Akokos, comprising four local governments. We don’t joke with him, we know what he has done for us.

“Prophet had it in mind that he was coming home, so why would they bury his remains in Lagos? That is what he wants! He is from here. Look at these late pastors, Orimolade was brought to Ikare, Babalola was taken to Ilesha, Obadare was taken to Ikeji-Arakeji in Osun State, among others, so why will ours be different? Is he from Lagos? So, they should please, don’t get the whole Akoko angry, because all the Obas in Akoko have been calling me, expecting to know the time of the burial.

“Some places in Ondo State have no electricity for the past six years but he solved our problems, bought transformers, fixed everything, and paid, so it’s not only my battle but the whole Akoko,” he had said.

Some youths in Ondo State under the aegis of Akoko Youth Forum also urged the family of the late cleric to bring his remains to his hometown, Arigidi Akoko for burial.

They also called on the government to consider immortalising Joshua by naming an institution after the cleric.

The youths, who are from the four local government areas of Akoko made the call at the weekend during a ‘special walk’ to honour the departed cleric in his hometown of Arigidi Akoko.

Speaking at the procession, the President of the Akoko Youth Forum, Mr. Ifeoluwa Ajibuwa described the late Joshua as a charismatic pastor, televangelist, and philanthropist who devoted his life to the teaching of Christ.

But a source close to the family and one of the members of the delegation to Lagos said that Joshua’s wife, Evelyn, and the two children who were already in Nigeria from the United Kingdom said the late televangelist would be buried at a particular spot in the church in accordance with his wish when he was alive.

Related Topics:TB Joshua
Up Next

Man Flees After Raping Girl Into Coma, Leaving Her With Damaged Anus