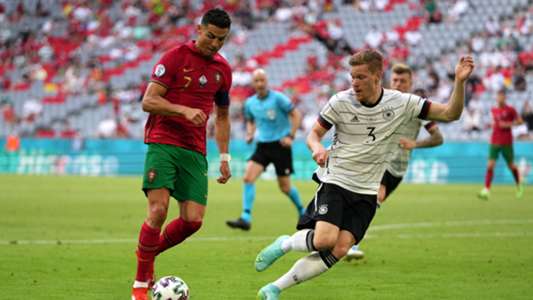 Germany came from behind to overpower Portugal 4-2 in the highest goalscoring football match of the ongoing Euro 2020. It was a cracking game of football between the two European heavyweights in Group F.

Portugal took the lead in the 16th minute following a swift counter attacking move which was finished off by Cristiano Ronaldo. Ronaldo’s strike has drawn him level with Patrick Schick as the highest goal scorer of the competition on three goals and the Portuguese prolific goal scorer is now two goals short of Ali Daei’s record as the all-time top goal scorer in international football history.

Attention switched from Ronaldo to Germany when they turned the game around. Two own goals by Ruben Dias and Guerrero put the Germans ahead at the end of the first half. The Germans deserved to be ahead going into the break owing to their quality style of football.

Two goals became three for Germany within the opening minutes of the restart as Kai Havertz tapped in from Gosens’ pinpoint cross and then Gosens got one for himself to make the score line delightful for Germany. After going behind in the early exchanges, they were leading 4-1.

Portugal, the current holders reduced the deficit to two goals through Liverpool’s Diogo Nota. That would be the last man to find the back of the net in the festival of goals before the final whistle.

However, Germany’s triumph has thrown qualification from the group of death wide open as France, Germany, Portugal and Hungary all stand a chance of advancing to the next round.