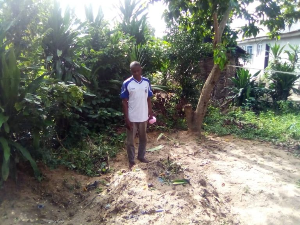 Mr Oyedele Aladeotan, father of 19-year-old man, killed by a stray bullet of the Joint Border Patrol Team, has called on the State and Federal Governments to assist him with a stable job.

Aladeotan, who claimed to be father of seven children and a security man with Badagry Local Government, said this would enable him to take proper care of his remaining six children.

He told Newsmen on Thursday that his son was killed while preparing for the Senior School Examination.

The SS3 student, Kehinde Aladeotan, 19, was shot dead during a clash between security operatives of the Joint Border Patrol Team (JBPT) and suspected rice smugglers at Irosu Village near Badagry on June 19.

It was gathered that Kehinde was hit by a stray bullet and died on the spot.

JBPT, which comprises Customs, Army and Immigration, was on routine patrol at Irosu Community near Sawa checkpoint around Owode-Apa Border post in search of smuggled foreign rice, following a tipoff.

Aladeotan, who hails from Ilaje in Ondo State, and residing at Kankon, Badagry, said: “I am not asking for any money in replacement of my dead son from the government.

“But, they can assist by placing me on a regular work instead of the contract work I’m doing now.

“They can, even assist my remaining six children in whatever way they can, so that the pains of my dead son will not kill me too.

“I am working as a security guard at the local government in Kankon with N10,000 salary monthly, because I can’t go fishing again.

“It is with this little amount that my children and I survived with.

“My dead son is twins, his sister, Taiwo, has married after finishing her school.”

Aladeotan said that his son was not a smuggler, neither did he know how to ride motorcycle, adding on that day he went to collect coconut waste with his brother.

“After collecting them, he went to a canteen to eat; it was when he was coming from there that the stray bullet of the Customs hit his neck and killed him.

“After killing my son, they put a cutlass in his hand and two bags of 50kg foreign rice behind him to deceive the public that he was a smuggler.

According to him, I am grateful to Commodore Morakinyo Akinyode, the Commander of Nigerian Air Force (NAF) Forward Operations Base, Badagry, who ordered the release of my son’s corpse.

“He was the only officer on ground that day; he really assisted me and I am grateful to him and the Baale Abraham Lincoln too.

“I am grateful to the Chairman of Badagry West LCDA, Mr Joseph Gbenu, and his deputy too, they came to console me in spite of the heavy rainfall.

“I have since buried my son here at the back of my house, but it is more painful that despite my sufferings and struggling to see them through, I did not eat fruit of my labour.

“Kehinde has no child, nothing to show for his existence in life; his death is a painful one.

“I have been the only one taking care of my seven children since their mother left me two years ago.

“We had no quarrel, I did not beat her; she just parked her load one night and left me and my seven children.

“Since then, I have been the one taking care of my seven children,” Aladeotan said.