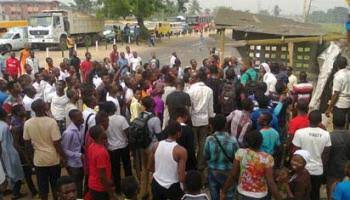 Students of the Olusegun Agagu University of Science and Technology (OAUSTECH), Okitipupa, Ondo State have protested the alleged rape of four female students of the institution by gunmen.

In a swift reaction, the Management of institution has shutdown the school for two weeks over the security threats.

READ ALSO: Man Jumps Out Of Taxiing Aircraft After An Altercation On Board

The hoodlums also robbed the students of their valuables like phones, laptops, gadgets before raping the female students at gunpoint.

The university’s students had trooped out to register their displeasure over incessant robberies in their hostels, threats to their lives and properties and rape of the students by hoodlums.

During the peaceful protest, the students blocked the Okitipupa-Igbokoda highway thereby disrupting free-flow of traffic.

The President, Student Union Government of the institution, Damilola Okunomo confirmed the ugly incident to newsmen.

Okunomo expressed concern over the security situation in the institution adding that ” the students were tired of the level of insecurity in the area.

He confirmed that four female students were raped by the hoodlum who invaded the instition from the neighbourhood.

Okunomo alleged that the institution’s management was not doing enough on the security of lives and properties of students.

According to him “We are tired of this insecurity, armed hoodlums usually come to our off-campus hostels, rob students at gunpoint, and also rape our female students.

“The school management is not to doing enough as we are the ones securing ourselves by working as vigilantes most times, the situation is terrible.

“We urge the school management to do its best in securing us and complete all the uncompleted hostel accommodations in our campus as this will also guarantee our security.

The Dean of Students Affairs, Ilemobayo Oguntimehin said that the school management was doing its best to secure the lives and properties of the students.

The students said that the notice directed them to return to their homes.

Recall that in May, this year students of the institution staged a protest over alleged incessant attacks, rape and robbery by hoodlums in their hostels.

The President of the institutions Students Union Government (SUG), Damilola Okunomo then lamented that the hoodlums always invade their hostels at might with charms

Okunomo sent a Save Our Soul message to the state government, traditional rulers and other notable personalities in the community

He said that the students could not continue to live in fear while on campus.

“We are here to learn and to be educated which can only be achieved in a conducive environment.

“These people came to our hostels, attacked us with guns, cutlasses, whether we are in academic session or not, they carted away, our shoes, clothes, phones, televisions among other belongings.

“Our lives are at stake because they come with arms and rape.”

The institution image maker, Abdulazeez Adebayo when contacted then said the school management was finding ways to stop the attacks.

Adebayo said several meetings have been held with stakeholders in the community to ensure safety of the students and pit a stop to the ugly incident.

He assured that the authorities of the institution would leave no stone unturned to ensure the safety of their students.

Man Jumps Out Of Taxiing Aircraft After An Altercation On Board