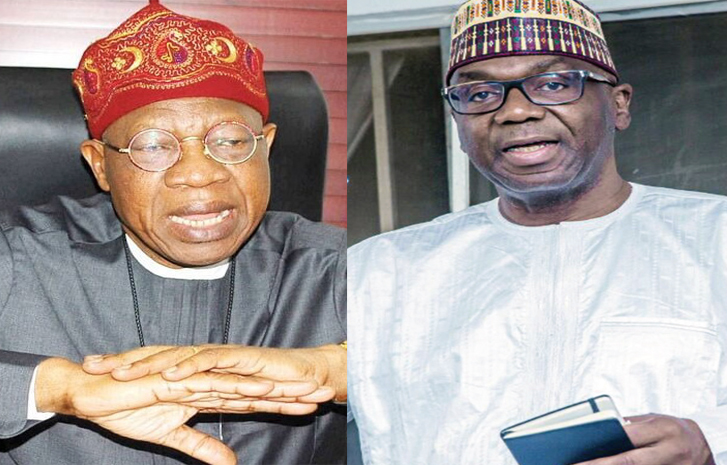 The crisis in the All Progressives Congress, APC, in Kwara State between Alhaji Lai Mohammed and Governor AbdulRahman AbdulRazaq became messier at the weekend after the governor opened a can of worms over the funding of the campaign which led to his 2019 gubernatorial election.

While Minister of Information and Culture, Lai Mohammed, said he would not join issues with the Kwara governor, the immediate past Chairman of APC in the state, Bashir Bolarinwa, contended that  the governor was economical with the truth.

Governor AbdulRazaq had, on Saturday during the launch of a book titled: “O to ge”, raised issues of alleged missing campaign funds among others, in series of events that cumulated in APC’s victory in the 2019 gubernatorial election.

Asked to react to the outburst of the Kwara Governor, Alhaji Lai Mohammed told Vanguard, Sunday in a telephone interview; “Have you ever seen me joining issues with him? I will not join issues with him.”

However, Bolarinwa dismissed claims by Governor Abdulrazaq that he was not consulted by the party before constituting the party’s campaign team for the 2019 general elections.

Bolarinwa a close asssociate of Lai Mohammed insisted that Abdulrazaq was consulted and that the governor suggested a uniform campaign body for the party to save cost and make it effective in winning the Kwara election.

According to the former APC chairman, the governor even nominated Kale Belgore to be on the committee before turning his back on the party.

He said: “The governor has told the World the truth that he did not fund the campaign of the party.

“He was contacted and after approving the campaign structure headed by Chief Sunday Oyebiyi, the Senatorial Chairman of APC in Kwara North Senatorial zone, he turned his back and abandoned the party.

“It was the Minister, Lai Mohammed who funded the campaigns of the party for the 2019 elections.”

On alleged stolen donations made to the party, he said: “I don’t know anything about that.”

Governor AbdulRazaq represented by his Deputy, Mr Kayode Alabi at the launch of the book written by Mr Tonni Oyeyiola, claimed hundreds of millions of Naira donated for his campaign in the build-up to the 2019 gubernatorial election were stolen.

Governor AbdulRazaq said: “Since this book is about history, I feel it is important to set the record straight on a few things.

“First, the O to ge is the struggle of our people and it did not necessarily start in 2019.

“Every Kwaran of good conscience owned and worked for that struggle in various ways. We were only positioned by providence to lead the final lap of the breaking of the jinx that dated back many decades.

“However, permit me to assert here that contrary to some claims out there, the battle cry O to ge and its adoption were a product of a statewide field research that I commissioned shortly after the primaries in October 2018.

“If anyone could lay claim to its copyright, it has to be the Hook Nigeria, a communications outfit owned by very young people. One of them, Toyyib, is a Kwara South prince.

“I had held meetings with various PR outfits but I found their own presentation most strikingly catchy and reflective of the Kwara struggle. We ran our campaign with that slogan and it quickly resonated with our masses.

“So popular was it that even motorcyclists and trailer drivers adopted it in their honking. It became a household refrain. To God be the glory and we thanked the people of Kwara for this.

“I also need to set the record straight about the party crisis. It did not begin after the election or swearing-in.

“It is safe to say that those who claimed to own the party in the state at that time practically disowned me until after the President had won his election and the coast became clearer back home. Here is the story:

“Shortly after the primaries in October, the party told me they have set up a campaign structure.

“Nobody consulted me before doing that, even though I was the governorship candidate. They asked me to fund the campaign structure that I was not privy to. Of course I declined it.

“I would later lead my own small campaign team across the state. It is on record that the party officially boycotted my campaign tours.

“Party officials got the instruction not to attend my campaign. A few of them can testify to this. I went round the whole of Kwara North without the party.

“However, they stylishly joined the campaign after the presidential election, when it was clear Kwarans had decided in our favour.

“I am not aware of any decent democracy where a candidate would not be given the privilege of shaping the direction of his own campaign.

“It is even worse that my campaign was boycotted because I refused to be led by the nose.

“I have told these stories of the slogan and of the party issues to disabuse the mind of Kwarans or friends of Kwara who may not have had this information.

“In doing so, I am not claiming sole credit for the success of the struggle, far from it. I have done so simply to clear the air, and this book launch offers the right platform to speak up.

“And for ministers, governors, party supporters and friends of Kwara who I later heard donated hundreds of millions of naira to support the O to ge struggle in Kwara, I want to say that I did not receive a kobo of that fund.

“But how that money was managed or stolen is a story for another day.”

GreenWhiteGreen GWG reports that Lai Mohammed spearheaded the revolution that eclipsed the dominance of Bukola Saraki over Kwara State and brought forth Abdulrazaq as governor of the state.

18 APC Govs, Others Set To Receive Matawalle From PDP