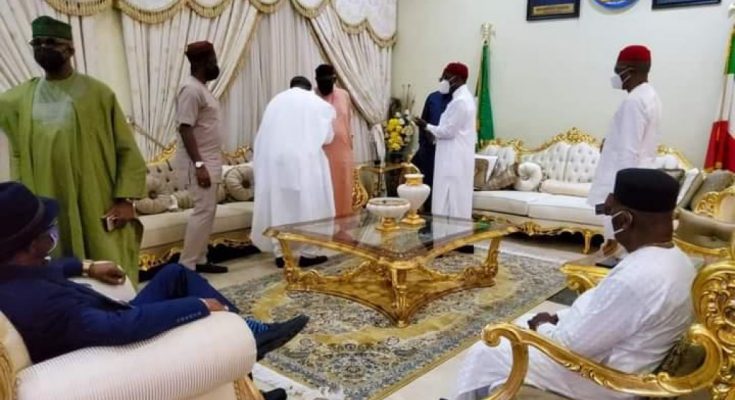 The seventeen (17) Southern governors are expected to converge in Lagos state on Monday.

Top of the agenda of the meeting which is a follow-up of such development in Asaba, Delta state some weeks ago, was expected to border on the Yoruba nation rally including Department of State Services (DSS) raid on Sunday Igboho’s residence.

Also expected to be discussed is the repatriation of Nnamdi Kanu, embattled leader of the Indigenous People of Biafra, IPOB.

Confirming the meeting, Gboyega Akosile, the Chief Press Secretary to the governor of Lagos state and the host, Babajide Sanwo-Olu, disclosed the sitting of the governors of the geo-political zone is scheduled to commence by 10am, at the State House, Alausa, in Ikeja.

It will also discuss the level of achievements of the resolutions arrived at the last meeting and chart the way forward.

GWG recalls the governors in their last meeting in Delta appraised the security situation in the country and called on President Muhammadu Buhari to reimpose confidence in the polity by addressing the nation on the situation on ground.

A communique of the meeting of the governors held in Asaba, Delta State also declared the banning of open grazing in the Southern part of the country upon what they claimed was the infiltration of armed herders and bandits among the herders.

They also called for the creation of state police.

The Asaba meeting was attended by 13 governors and two deputy governors(Akwa Ibom and Imo)  with the notable exceptions being the governors of Cross River and Osun States.

Related Topics:LagosSouthern governors
Up Next