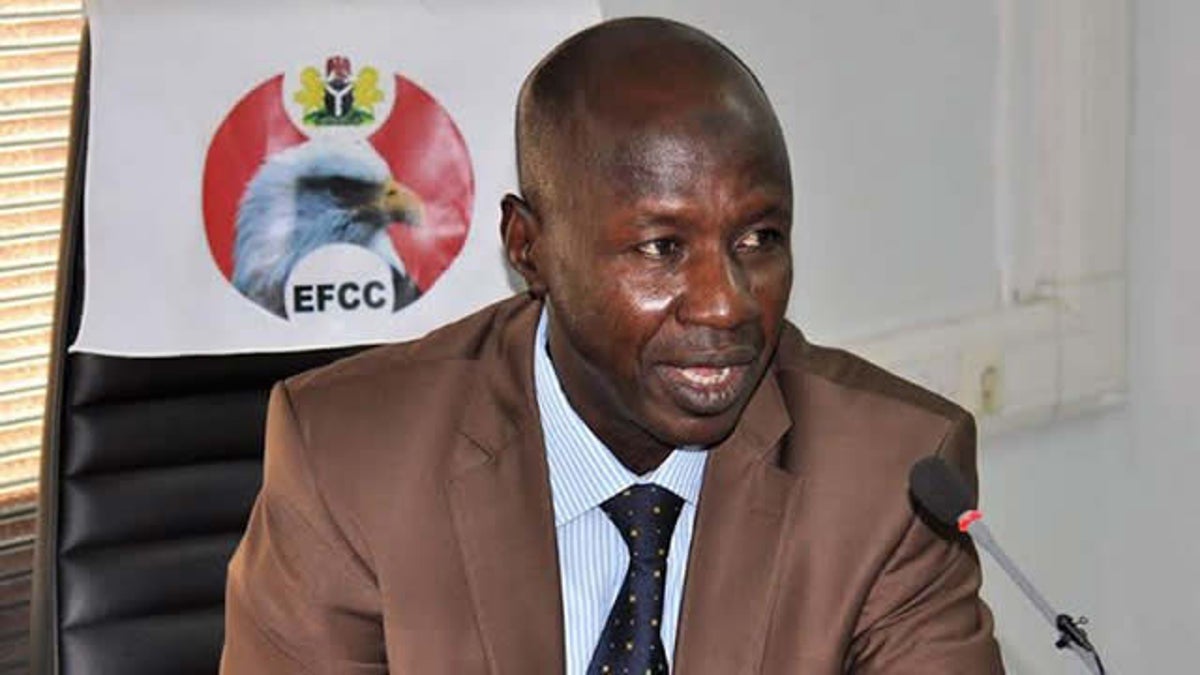 The Peoples Democratic Party (PDP) has berated President Muhammadu Buhari over plan to consider Ibrahim Magu, former acting chairman of the Economic and Financial Crimes Commission (EFCC), for promotion to the rank of assistant inspector-general (AIG) by the Police Service Commission (PSC).

PDP said the eventual promotion of Magu will amount to rewarding corruption, admonishing Buhari not to let the former anti-graft of the hook of corruption charges.

The PSC is considering Magu’s promotion in spite of the recommendation of a presidential panel headed by Justice Ayo Salami set up to probe the former EFCC boss.

The panel had recommended that Magu should be prosecuted over allegations of abuse of office and referred to the inspector-general of police for “necessary disciplinary action”.

However, since the panel submitted the report in November 2020, only a few of the recommendations have been implemented.

Reacting to the development, the PDP, in a statement by Kola Ologbondiyan on Tuesday, said the move to promote Magu is a “direct slap on the sensibilities of Nigerians”.

PDP said Buhari’s administration has become renowned for its penchant to cover up corruption among members of his government.

“The party describes as outrageous and a direct slap on the sensibilities of Nigerians that the Buhari administration is reportedly planning to promote Magu to Assistant Inspector General of Police, despite being indicted in the alleged stealing of billions of naira recovered by the EFCC as well as cases of abuse of office in the commission by the Justice Ayo Salami Presidential investigation panel,” the statement reads.

“It is indeed ludicrous, though true to its proclivity to cover corruption, that the Buhari Presidency, instead of allowing the law to take its course, is rather rewarding corruption by reportedly planning to promote an individual indicted for treasury looting and compromising of high-profile corruption cases for pecuniary gains.

“Our party invites Nigerians to note how the Buhari administration has failed to take disciplinary action against Magu, as recommended by the Salami panel, but seeks to reward him with a promotion in spite of the report by the Attorney General of the Federation, Abubakar Malami, which nailed him for alleged diversion of recovered funds and fraudulent sale of assets seized by the EFCC.

“This is in addition to reports by the Department of State Services (DSS) which also stated that Magu had failed “the integrity test and will eventually constitute a liability to the anti-corruption stand of the current government”.

“The reports of planned promotion for Magu has heightened apprehension in the public space that certain top officials in the Buhari Presidency are overburdened with corruption complicity and fears that a docked Magu would expose their atrocities.

“Nigerians could recall how the counsel to Magu, Wahab Shittu, boastfully declared that he has Magu’s instruction to inform the public that “he will be reinstated back to office”.

“The PDP, however, calls on the Police Service Commission (PSC) and the Police high command to resist the pressure from the corrupt cabal in the Buhari Presidency to pitch them against Nigerians over Magu but rather commence processes for his prosecution in a court of competent jurisdiction in the interest of justice.

“The PDP further counsels President Buhari not to “ease off” the allegations of corruption against Magu but should make the Justice Salami’s report open and if necessary, prosecute the former EFCC chairman.”