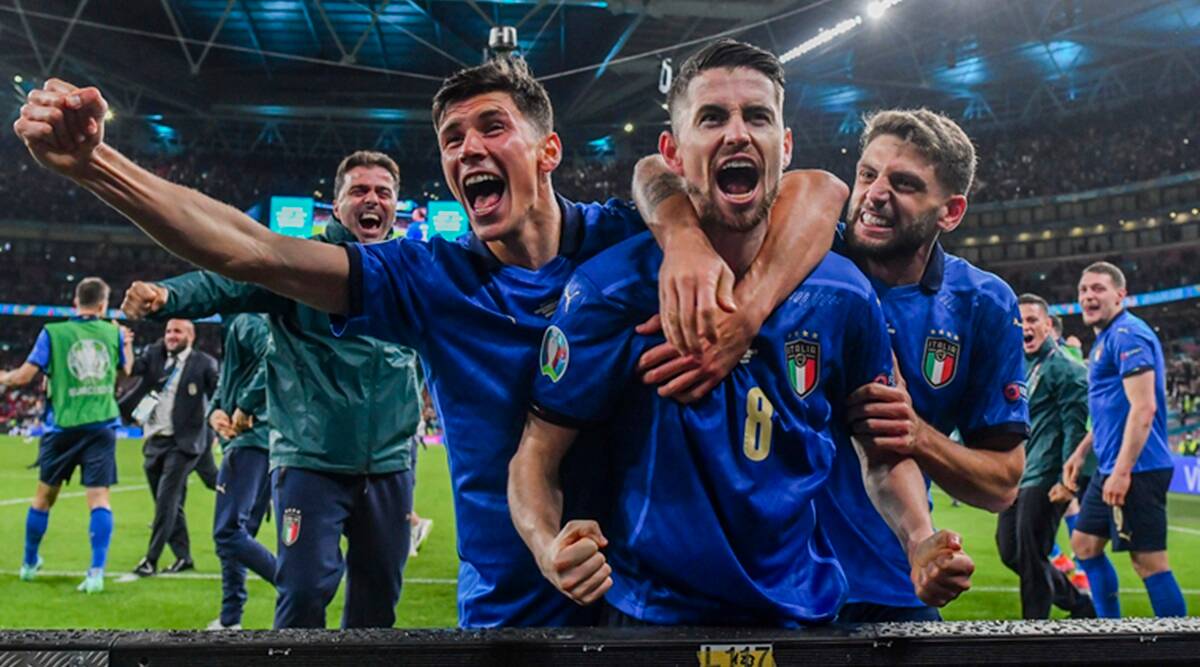 Jubilant Italians after the penalty shoot out

Italy qualified for the final match of the 2020 European Championships after beating Spain in a dramatic penalty kicks shootout at Wembley after 120 minutes football had ended 1-1.

This was all before Jorginho calmly slotted home to send the Italians into the final.

It was harsh on the Spanish, who played arguably their best football of the tournament and should have won the game in 90 minutes.

The only change made by Italy coach Roberto Mancini ahead of the game was to bring Emerson in at left-back for the injured Leonardo Spinazzola.

On his part, Luis Enrique brought in Eric Garcia for Pau Torres in defence, while Olmo and Mikel Oyarzabal replaced Morata and Pablo Sarabia who has a muscle injury.

The Spain coach was clearly looking for greater mobility and a high line of pressure against an organized Italian defence.

After an even opening five minutes, Spain took control by swamping Jorginho and Verratti with their midfield pressure.

Oyarzabal wasted the first chance to open the scoring when he mis-controlled Pedri’s pass when through on goal.

Italy had a chance, only for Barella to be crowded out with Spain goalkeeper Simon out of his ground.

Italy had controlled the ball in their earlier games and were clearly uncomfortable against Spain’s pace and aggression.

They failed to manage a single shot until Unai palmed away Emerson’s effort in the 45th minute.

The Spanish will have been disappointed at not working Donnarumma more in spite of their dominance.

The second half started as the first ended.

Di Lorenzo putting Olmo’s cross out for a corner-kick with Torres waiting to pounce, before Sergio Busquets fired just over after a pass from Oyarzabal.

At the other end, Simon got down well to save from Chiesa after a rare Italy break, before Oyarzabal’s effort went straight at Donnarumma from outside of the area.

Chiesa put Italy ahead with a curling shot into the corner of the net in the 60th minute after Garcia allowed him to cut inside and pick his spot.

Enrique reacted immediately with Morata and Gerard Moreno quickly on the pitch, but things looked to be going Italy’s way as they took the pace out of the game.

But this was only until the 80th minute when Morata collected the ball in midfield, exchanged passes with Olmo and scored with a low finish.

In extra time the impressive Olmo almost surprised everyone with a low free-kick, with the ball pinging around the area before bouncing out.

Donnarumma then punched clear as Morata threatened to pounce.

The second period of extra time saw little in the way of chances and the game went into the dramatic penalty shootout. (Xinhua/NAN)