Alarm As Fleeing Policewoman Kills Second Lover In One Week 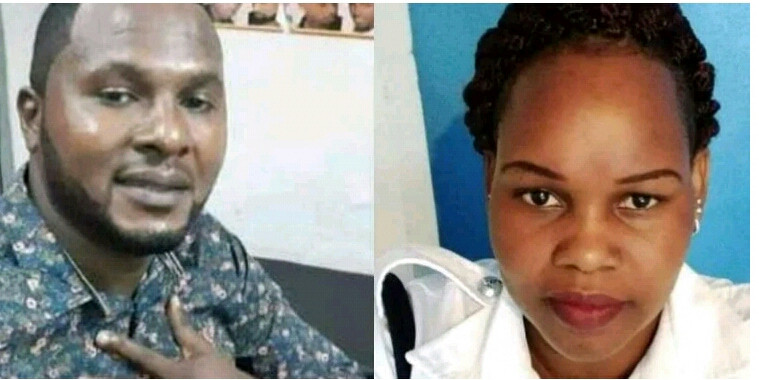 A 34 year-old policewoman, Carolyne Kangogo, a corporal in the Kenya police, has killed her lover, leading to a countrywide hunt.

Kangogo had already been indicted in the killing of Constable John Ogweno, with whom she also had a love affair.

According to the Kenya police, Ogweno, who was with the Nakuru Central Police Station, was found dead on Monday morning, inside a car at Kasarani police line in Nakuru where the two lived.

During a search for her, police in Kiambu disclosed that the policewoman had spent the night with one Peter Ndwiga, a security consultant, whose body was found at a hotel room in Ruiru on Tuesday, July 6.

Police officers rushed to the scene where it was established that a man and a lady booked room on July, 5, 2021 at 4:22pm.

The body of the man was found to have a bullet wound on the head, and one empty spent cartridge of 9mm was found in the room. One wallet containing an ID card with the names Peter Ndwiga, 32, and car keys with a holder written Toyota Probox KDB 506U were found in the pockets of the deceased.

The hotel’s CCTV footage shows a woman in a yellow hoodie leaving the hotel. Another screen grab of the footage obtained from cameras at the VIP lounge showed the policewoman walking into the hotel with a man who was wearing a burgundy pair of trousers and a grey coat.

Confirming the latest development, the Directorate of Criminal Investigations (DCI) said, the policewoman, Ms Kagongo lured the man to the room after paying for it, before shooting him in the head at point-blank range.

“Detectives are looking for a female Police Officer who has gone berserk and is on a killing spree,” DCI said in a statement.

“Corporal Caroline Kangogo, the suspect behind the killing of Police Constable John Ogweno, in Nakuru, has shot dead yet another man in cold blood. At around 1pm Tuesday, the owner of the hotel, Mr Peter Mugeshi, made a distress call to Theta Police Station and Murera Police Post under Kiambu Police Station to report that a client was found dead inside his room.”

“The rogue officer who took off with Ogweno’s firearm a loaded ceska pistol, lured a man to Dedamax Hotel in Kimbo, Juja area at around 4pm yesterday. She later emerged from the room at around midnight and fled to an unknown destination, leaving the dead man’s body sprawled on the bed”

How Delta Police Caught Armed Robber In The Act

The statement implored members of the public, especially men, to be wary of the armed monstrous savage officer who’s killing men through sleight and artifice.

The body of the man, which was discovered on top of the bed, had one shoe on. He still had his clothes on. The body was moved to General Kago Funeral Home in Thika, awaiting a post-mortem.

Detectives in Nakuru say the policewoman was enmeshed in a web of love affairs. Investigations also indicate that the Ms Kagongo, on several occasions communicated with people who are on police radar for various crimes.

Nakuru County Criminal Investigations Officer Anthony Sunguti said the detectives have reason to believe that Mr Ogweno could have died at the hands of one or several people.

“Some of the people she has been communicating with, according to her phone records, include a number of dangerous criminals who are being pursued by the police,” said Mr Sunguti.

The officer revealed that Ms Kangogo was married to a senior police officer based in Mombasa County and has two children. It is not clear whether the officer was still married or had divorced.

One of her colleagues said the policewoman had been involved in several dramas with her lovers, majority of whom are police officers.