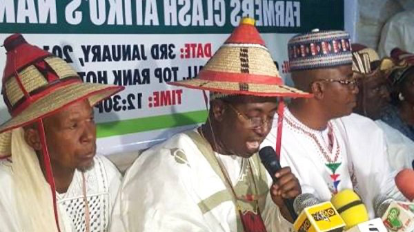 Recall that 17 governors from Southern Nigeria met in Lagos to discuss certain issues affecting the region. One of the major resolutions reached was the total ban on open grazing in all southern states. Adevelopment did not go down well with Miyetti Allah.

Saleh Alhassan, National Secretary of the group, stated that the Southern governors were only playing politics with their resolution to end open grazing in their territories by September 1. He told Tribune;

“They (the Southern governors) are hungry for power. Why are they making open grazing an issue? Is it the only problem in the country? They may not even get the power.”

“Fulani herdsmen cannot move to anywhere. The Southern governors have not made any alternative (provision) for them. You cannot just drive away from an economic group,” Alhassan said.

“For herders, it doesn’t matter where the president comes from but if they want the power to move to the South, should it be through blackmail? It should be by negotiation, campaign and strategy as well as political understanding. And mind you, this thing is based on numerical strength.”

“If they (Southern governors) want to blackmail the North, they may not get the presidency. They are only hungry for power with the direction they are going,” he said.