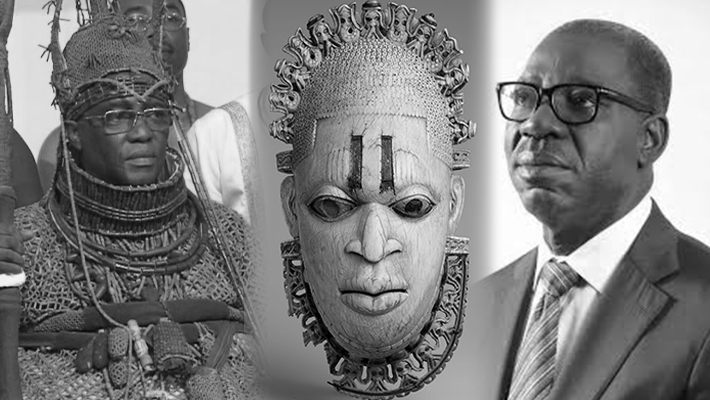 The Governor of Edo State, Godwin Obaseki, says he will not let the impasse that has characterised the soon-to-be repatriated stolen artefacts put his administration on a collision course with the Oba of Benin, Ewuare II.

This was contained in a statement issued by the Secretary to the Edo State Government, Osarodion Ogie, on Monday.

This was in reaction to a statement issued by the Oba of Benin asking the Federal Government to temporarily take custody of 1,130 stolen Benin artefacts that are about to be repatriated from Europe.

This is as the monarch stated that the rightful destination of the artefacts should be the Benin Royal Museum.

The monarch said this following a statement issued by the Edo State Government which revealed that a “transformational” museum would be built in Benin to house the artefacts upon their return.

Reacting, Ogie in the statement issued on Monday allayed fears of a conflict between the state government and the Oba of Benin, adding that Governor Obaseki will maintain his immense respect for the monarch.

The statement read, “The attention of the Edo State Government (EDSG) has been drawn to the widely publicised media statement issued by the Palace of His Royal Majesty, Omo N’Oba N’Edo Uku Akpolokpolo, Oba of Benin, Oba Ewuare II.

“It is concerning that the statement appears to have created the impression that there is a major conflict between the interests of the EDSG and His Royal Majesty with regards to the laudable national milestone of having our highly valued artefacts returned home to Nigeria.

“The Government of Edo State and the Governor have always acted transparently and in consonance with existing Federal and State laws in all matters relating to the proposed return of the artefacts and monuments.

“The actions of the government thus far on this issue have been driven by selfless, patriotic considerations and in the best interest of Edo State and Edo people.”

Ogie said, “The Governor of Edo State, His Excellency, Mr. Godwin Obaseki, has displayed and will continue to display immense respect for our traditional institutions and therefore will continue to make effort to secure a private audience with His Royal Majesty to discuss his concerns.”

He continued, “The Governor has consequently ordered that on no account should anyone, whether in government or acting independently, engage in disrespectful exchanges and/or altercation with our revered Royal Majesty and the Benin Royal Palace.

“Governor Obaseki, meanwhile, expresses his gratitude to the President of the Federal Republic of Nigeria, President Muhammadu Buhari (GCFR) and Minister of Information and Culture, Alhaji Lai Mohammed and other officials of the federal government for their patriotic and tireless efforts that have brought us to the verge of this eagerly anticipated achievement which has remained elusive for over a century.

“While thanking and congratulating the Federal Government, the President, the Minister, the Royal Palace of the Oba of Benin and all stakeholders who have contributed to the successes so far recorded in this endeavour, the Governor assures that he will continue to work assiduously with all local and international stakeholders for the eventual and final return of these valued records of our great and glorious heritage back to Benin City for the benefit of ALL Edo people, Nigerians and the black race.”