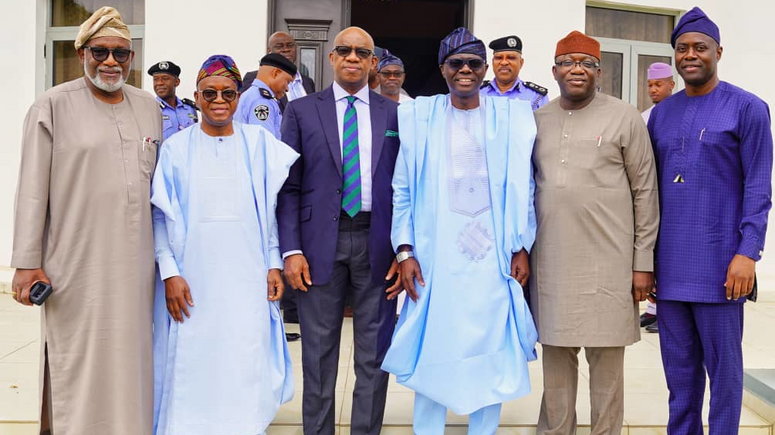 Governors in the South-West geopolitical zone have proposed conversion of the present six geopolitical zones into federating units, as part of the ongoing review of the 1999 Constitution by the National Assembly.

The South West Governors’ Forum, in a document presented to members of the National Assembly from the geopolitical zone, also made other proposals to weaken central government, while allocating more powers to the federating units and states.

According To PUNCH, The document was presented to the South-West caucus of the National Assembly on Tuesday.

The governors had met with the lawmakers in Abuja behind closed doors last week.

Afer the meeting, Akeredolu had said the South-West would be approaching the constitution amendment with a common front.

He added that the meeting had set a committee made of up senators led by the caucus chairman (Opeyemi Bamidele) and House of Representatives caucus chairman (Femi Fakeye) and attorneys-generals of the South-West states.

 
“The committee is to harmonise our position so that we can present it when necessary before the two Houses and at the end of the day, have a constitutional amendment and have our serious input. Thank you all,” he had said.

The PUNCH reliably learnt on Friday that the joint Senate and House committee would fine tune the proposals and ensured that they were captured in the constitution review exercise.

In the document titled, ‘Proposals for the Review of the Constitution of the Federal Republic of Nigeria 1999 (As Amended): Presentation by South-West Governors’ Forum’ and dated July 5, 2021, the governors sought amendment to Section 3(1) and (3) of the constitution.

The forum added that “the geopolitical zones have been recognised and accepted by Nigeria’s political class.”

It also said, “Section 3(6) be amended to provide for a number of local governments or such autonomous administrative units to be created by the respective federating units or states, the criteria of which shall include population, taxable capacity, ethno-religious or other cultural and social affinities.”

Another major proposal in the presentation is an amendment to Section 7 of the constitution which is about local government.

The governors asked that the section “include an additional (sub)section prohibiting the dissolution of elected local government councils.”

“This will be in compliance with the Supreme Court decisions in ALGON v. Oyo State Government; AG Plateau State & Others v. Goyol & Others; Governor, Ekiti State v. Olubunmo & Others,” the forum added.

Also, the South-West governors proposed that Section 8 be amended by deleting Subsections 5 and 6, thereby removing the powers to create state from the Federal Government.

“However, Section 8(5) and (6) should be expunged to make local government creation the exclusive duty of the state government.”

The governors also wanted the wordings of Section 14(4) changed.

If the proposed amendment to Section 15 eventually becomes law, Nigeria’s motto would be changed to ‘Unity and Faith, Equality, Peace and Progress.’

The forum also called for deletion of Section 29(4)(b), which confers adulthood status on a married under-18 woman.

Explaining the proposal, the governors say, “Section 29(4)(a) and (b) contradicts each other. While (a) says ‘full age means the age of 18 years and above’, (b) says ‘any woman who is married shall be deemed to be full of age.’ This reinforces child marriage which negates the Convention on the Rights of the Child 1989 and the Child’s Rights Act 2003, which outlaws child marriage.”

The governors also want the states to be in charge of mineral resources within their respective territories.

Consequently, they have proposed an amendment to Section 44(3) that vests exploitation of mineral oils and natural gas in the Federal Government.