BREAKING: Fight Breaks Out In House Of Reps 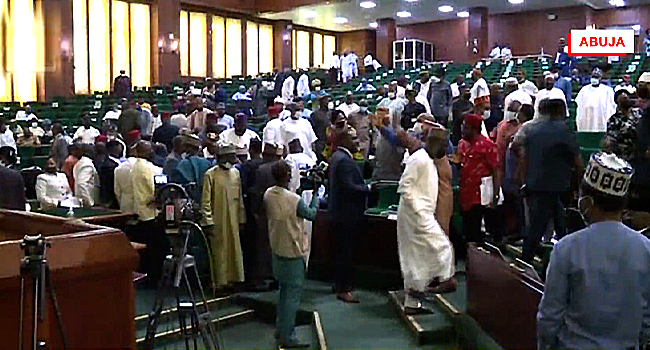 A fight broke out in the House of Representatives following a disagreement on whether or not members should vote on the electronic transmission of election results on Friday.

It was gathered that the House of Reps had taken presentations and testimonies from a Nigerian Telecommunication Commission, NCC team at plenary with the Speaker of the House, Hon. Femi Gbajabiamila, in charge.

The Speaker had announced that the House will revert to the Committee of the Whole to continue the consideration of the clause-by-clause report of the electoral bill from item 1 to 52.

However, the Deputy Speaker, Hon Ahmed Wase, is by the rules of the House in charge of the session as the Chairman.

It was gathered that Wase while assuming his seat stirred the hornet nest when he said that the House had already considered items 1 to 54.

Meanwhile, the controversial clause is captured in section 52(2) of the report.

The lawmakers, therefore, disagreed with Wase and said that they stopped at 52 yesterday (Thursday).

The development led to commotion in the House of Reps.

It was gathered that suddenly, a yet-to-be-identified member left his seat and furiously rapped another seated member.

The development again drew the attention of the lawmakers who intervened.

Normalcy is yet to return to the House as of the time of filing this report.

Related Topics:House of Representatives
Up Next

Why Electronic Transmission Of Election Results Is Not Realistic – NCC